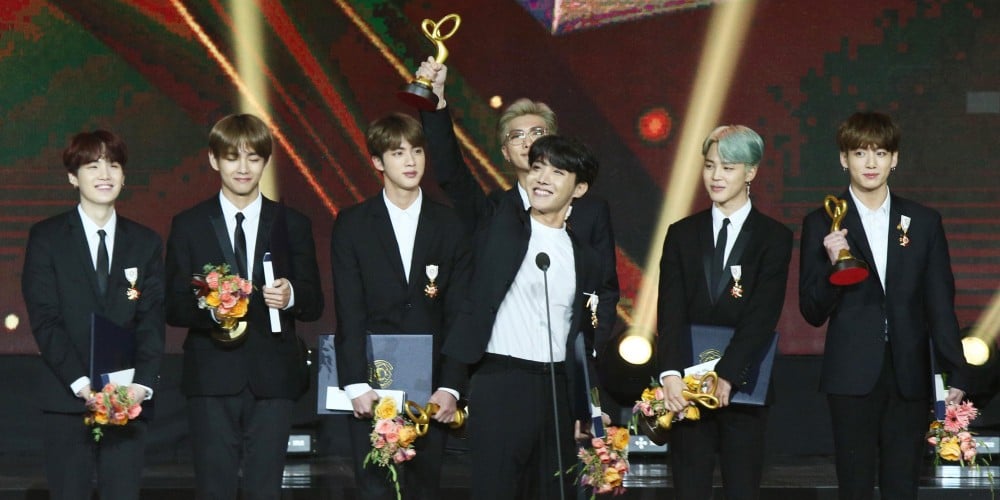 BTS is awarded at the '2018 Korean Popular Culture and Arts Award'.
The 'Korean Popular Culture and Arts Award' is a prestigious ceremony hosted by theÝMinistry of Culture, Sports,Ýand Tourism.Ý
On October 24, the award ceremony took place at the Olympic Hall in Seoul.ÝThe Big Hit EntertainmentÝboy group is awarded the 'Order of Cultural Merit',Ýwhich gives recognition to those who played a vital role in improving the national culture and development.ÝBTS is recognized for spreading K-pop andÝHangeul round the world. They're the first idol group ever and the youngest figure in the award ceremony history to receive an award.
Leader RMÝgave his award speech first. He stated, "Thank you so much. As a leader of BTS, I was in charge of the award speech but we get to share individual speeches so I want other members to have a chance to speak a lot today. I want to give this honor to ARMYs."
Next, JinÝsaid, "First, thank you so much for the award. We travel overseas often and people sing along to our song in Korean and tell us they've studied Korean. I am so proud and will work hard to spread our culture."
VÝstated, "I don't know. I'm not sure how to express this feeling in my mind right now. I think my family will be very proud of me. And ARMYs, I am not good at expressing but I want to tell you that I really appreciate and love you. I hope everyone here is filled with only good days."
SUGAÝsaid, "This is an honor to my family. Thank you so much. So much happened this year from #1 on Billboard, 'Billboard Music Awards', 'AMA', UN speech, but I think the 'Order of Cultural Merit' is the biggest honor. I will spread Korean music to the world with the mind of a national representative."
JiminÝsaid, "My heart feels like it's going to explode because it was always the leader hyungÝgiving the speech but I'm standing here right now. Everyone, this award is so meaningful because it was created by our members, employees, staff, manager hyungs, and you guys. It feels very huge to me. I am so grateful for you guys who're with us together and I want to tell you guys that this is by you. I sincerely appreciate it. I think we are the youngest hoobaes here. I am honored to meet the sunbaenims I sincerely admire. Just like the sunbaenims, I will work hard to become a person that gives good influence to many people."
JungkookÝstated, "First, thank you for giving us such meaning award. I think it's a great honor to be accepting an award with the sunbaenimsÝhere. And to be honest, I feel like this award is very overwhelming to us. But I will think that it was given for us to work harder and gratefully accept it. I appreciate ARMYs who cheer for us from close and afar, our family, and Bang Si HyukÝdaepyonim. I will spread Korean culture to various places around the world."
Last but not least, j-hopeÝsaid, "This is j-hope, the hope of BTS. I have been continuously saying this (introduction) and I'm so so happy that I'm actually becoming a hope to Korean pop culture. 'Order of Cultural Merit' - it's really a big award. It's a heavy award containing the hard work and passion of numerous staff members, BTS' blood and sweat, and worldwide ARMYs cheers. I will become the hope to the pop culture and amazingly promote. Thank you so much. ARMYs, I love you."
Share this article
Facebook
Twitter
65 57,015 Share 68% Upvoted

Thank you for the translations of their speeches. It's such a meaningful day in BTS members' lives. This award reflects recognition in Korea and they're the youngest people to receive it. They're making history once again.

AKP you've got the wrong title lol. BTS are not the FIRST neither the YOUNGEST at the the Korean popular culture and arts awards. They are the youngest and first to receive the Order of Cultural Merit yes, but not the first or the youngest at the ceremony. Multiple awards are given at the ceremony so you should search a little more instead of giving false info. Other idol groups like Twice have won other awards last year. Your title is just misleading and false. Anyways congrats to BTS for that award though since the winners have all like 40 years+ experience. They need a new bag for all the achievements.

Refund Sisters shed tears together after a successful debut
2 hours ago   4   2,992

Refund Sisters shed tears together after a successful debut
2 hours ago   4   2,992

This Artist Transformed BTS Members Into Iconic Disney Characters And The Results Are Jaw-Dropping
11 hours ago   6   3,041