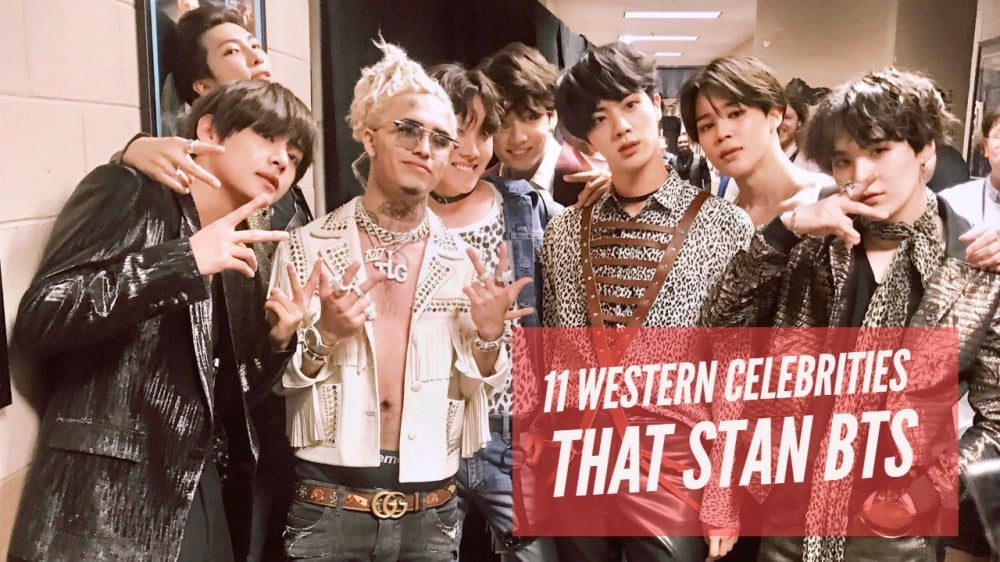 1. Camila Cabello
Here's a photo of singer, Camila Cabello, with BTS at the recent Billboard Music Awards! The singer looks gorgeous in her orange gown and indicated she was beyond excited to meet the group!
2. Joji, Rich Brian, and more
88RISING has indicated their love for BTS 'oppas' over and over, but when RM tweeted 88RISING's "Midsummer Madness" track as a recommendation to fans, Joji and Rich Brian took to give a special shoutout video as a thank you.
3. Ansel Elgort
After the ultra-famous moment where Ansel Elgort had a "You're Doing Great, Sweetie!" moment when BTS was performing an American award show, ARMY took Ansel in as an honorary ARMY! From there, Ansel has been incredibly supportive of the group, even coordinating to meet them multiple times.
4. Alyson Stoner
You might remember her from a whole host of things: Missy Elliott's old music video, Camp Rock, Mike's Super Short Show, Instagram, VidCon, BeautyCon, etc. But, above all, this triple threat is a BTS fan! Alyson Stoner has posted numerous videos on YouTube, Twitter, and IG praising K-Pop for being an embodiment of all things artistic, and displayed her love as a devout ARMY through multiple dance covers!
5. John Legend
John Legend found BTS backstage at the Billboard Music Awards, pulled out a BTS album out of a bag he was carrying and got their autographs for his daughter! As the ARMY we are, that's enough said: John and his daughter are one of us and we love him for it.
6. Lil Pump
Even Soundcloud rappers love BTS. Here's Lil Pump at the Billboard Music Awards with BTS. Both parties are showing major love to different styles of hip-hop. BTS loves "Gucci Gang" as much as Lil Pump loves "Cypher Pt. 4," we're sure of it.
7. John Cena
John Cena is hilarious with his love for BTS! He even recently tweeted that he was willing to start protecting them by being their bodyguard. Maybe he should consider changing his Twitter handle to "JeonCena" to show his support.
8. The EDM Scene
The EDM scene has been ultra-supportive of BTS meteoric rise. From Steve Aoki to The Chainsmokers to Zedd and more, the group has had no shortage of people remixing and dropping their songs at HUGE events. Take the video above for example, that happened just two days ago on July 27 in San Francisco. Robotaki, a DJ who has been remixing K-Pop songs since the early 2010s was playing Soulstice Festival and asked the crowd if they liked K-Pop. Suddenly the iconic "AYO Ladies and Gentlemen" line rang through the event hyping up ARMY and non-ARMY alike.
9. Charlie Puth
Despite Charlie's minor blunder of calling Jungkook by "Jungcook", the group and Charlie have had a huge mutual obsession with each other from the get-go. Since the group covered and recommended so many of Charlie's songs, Charlie seemed to also form a relationship and love for the group, too!
10. CHARLI XCX
Charli XCX took to meeting BTS as well and absolutely adored them! Charli has the cutest personality so we think that the group probably loved her as much as she loved them! It'd be interesting to see a collaboration with Western female singers, so we can't wait to see what Big Hit has in store in the future!
11. Pharrell Williams
Pharrell Williams met up BTS at the 2018 Billboard Music Awards and shortly thereafter, they followed each other on Twitter. We look forward to a potential collab between these two powerhouse artists!

Share your favorite celebrity BTS stan in the comments below!

CNBLUE's Yonghwa reveals why Lee Joon was kicked out of FNC Entertainment on 'Knowing Brothers'
28 minutes ago   0   3,708

Twice revealed to have the best demographics in many different relevant departments
15 hours ago   11   2,397