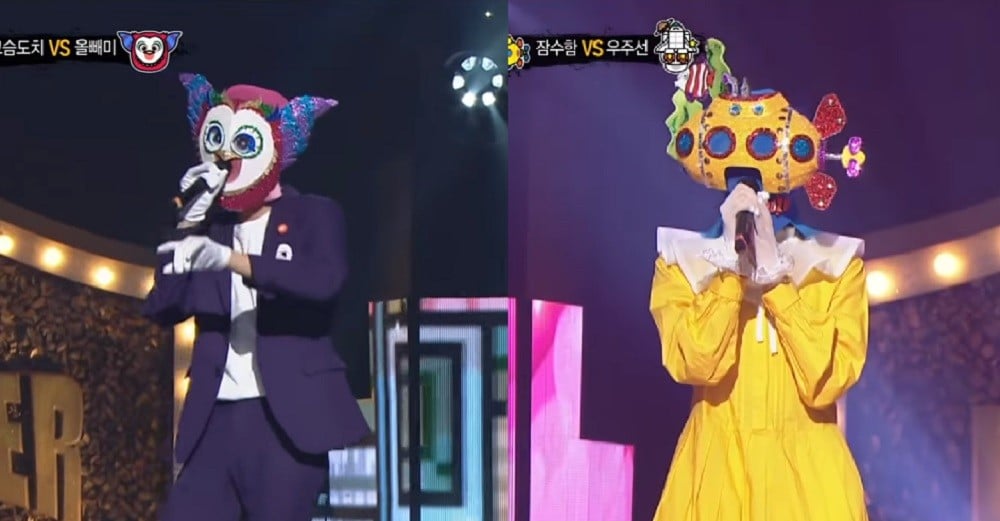 MBC's 'Mask King' presented more talented idol group members this week!
On the July 22nd episode of 'Mask King', a tall male singer under the mask of 'Owl', and a cute female singer under the mask of 'Submarine' appeared on the show. With each of them battling against other masks, both idol group members gave it their all during their respective first rounds. 'Owl' went against 'Hedgehog' to sing "Love In The Milky Way Cafe" by 10cm, and 'Submarine' battled against 'Spacecraft' to sing "Some" by Soyu and JungGiGo.
Unfortunately, for both 'Owl' and 'Submarine', their opponents got a higher number of votes, and the two singers had to reveal each of their identities. When 'Owl' took off his mask, the crowd immediately went wild as they found SF9's Rowoon under it! Audiences and panel members commented on his good singing skills, which they believed were hidden behind his good looks.
When it was time for 'Submarine' to reveal her identity, the crowd once again cheered loudly as they found Oh My Girl's Binnie under the mask. For a brief period, Binnie had been a part of the show's panel in the past. The cast members welcomed her back as a singer on stage, and applauded her for her amazing vocal abilities!
Were you able to guess each of their identities?
Share this article
Facebook
Twitter
0 18,168 Share 100% Upvoted

Stray Kids' Bang Chan releases an apology after an old clip surfaces of the idol doing a Jim Crow pose
4 hours ago   81   26,517

The 37-year-old woman, who sued Kim Yong Gun for forcing her to have an abortion, responds to the veteran actor's latest statement
1 minute ago   0   49

Stray Kids' Bang Chan releases an apology after an old clip surfaces of the idol doing a Jim Crow pose
4 hours ago   81   26,517