Some Super Junior fans are starting to take further action in regards to the group's comeback and Sungmin's future within the group.

On June 10, one of Super Junior's fan sites named 'Super Junior Gallery' on DC Inside have released a statement on Sungmin with the title 'Sungmin Out'. The content indicates that the fans can no longer stand and watch Sungmin do whatever he wishes based on his personal reasons that ultimately hurts the team but also how he has mistreated his fans over the years. They are demanding that Sungmin be removed from the group.

It reads, "We as a Super Junior fan community have decided that Sungmin's independent actions and behavior towards the fans over the years will ultimately hurt the group and its image. As such, we believe it would be unfair and unjustified for him to stay active as a Super Junior member. We can no longer support nor encourage the behaviors of this member and will boycott his activities and events. We as fans respect the group's decision, this is simply our request and not by any means forcing anything. Super Junior gallery will continue to support the group in exception of Sungmin and Kangin." 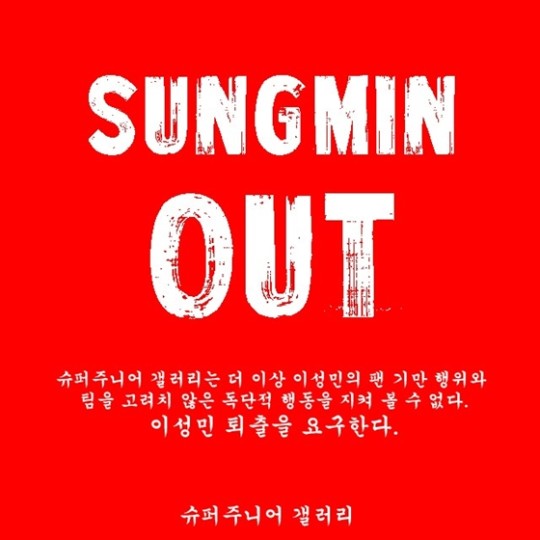 Tell us what you think of the current situation.