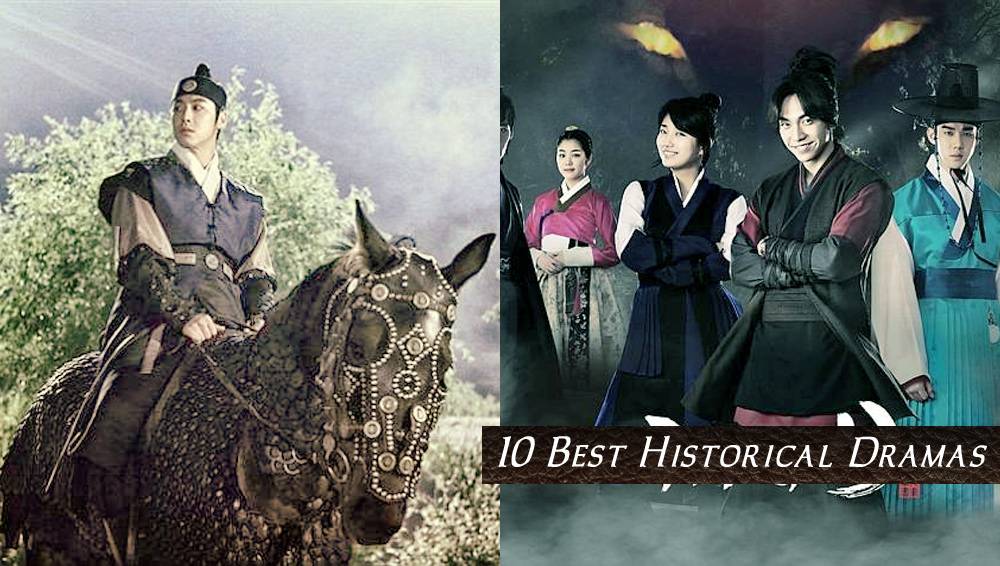 Historical dramas run the gamut from comedy to brutality, sometimes all in the same drama! Counter to the normal K-Drama, a historical drama can actually provide a little bit of education. While I won't pretend that 'The Night Watchman' or 'Book of the House of Gu' is real, they do have as their backdrop a real period in history, which can provide an interest in learning more about that era. They can also provide a rich visual feast and show you things you simply won't see anymore. Whatever the reasons, the historical drama is an important K-drama staple. Here are my picks for the 10 best!

Pure guilty pleasure, not unlike the barbarian movies of the 1980s. 'Chuno' is about a Joseon-era slave hunter who finds and recaptures slaves because of a slave that burnt his house down, killing his family. This drama features stylized, often brutal violence performed in slow motion to a half-rock, half-symphonic score. Not only that--there is also, like just about every K-Drama, a love triangle.

Nifty special effects and wuxia-style sword-swinging action led me to this one, which chronicles the tale of a crown prince inducted into a secret order whose purpose is to defend Joseon against ghosts. As the series progresses, he learns lessons that will help him become a better ruler. The action here is high-octane and lets up just long enough to let you breathe before starting back up again.

BOOK OF THE HOUSE OF GU

Pressed into work as a gisaeng (female entertainer, sometimes prostitute) when her nobleman father is framed and killed as a traitor, Yoon Seo Hwa runs away into the arms of a gumiho, a mystical shape-changing fox that has fallen in love with her and vows to protect her. Characterized by not only brutality but also heartfelt performances, 'Book of the House of Gu' found its way into the hearts of many K-Drama fans.

In the Joseon Dynasty, when women were denied even rights as basic as an education, a woman disguises herself as a man to in order to work and ends up attending a prestigious university. It's actually quite good as life in the university is pretty similar to our modern day schools -- bullying, hazing, student politics as well as national politics. Not only that but the tone is also fairly light-hearted for a historical piece.

One of the few Korean historicals not set in the Joseon Dynasty, Queen Seondeok takes place during the Three Kingdoms Era (572-602 A.D.), more than 800 years before Joseon. This drama tells the story of Queen Seondeok, Silla's first reigning queen. The series is opulent with scenes at the palace and with the nobility; it is also fairly vicious at some parts. Betrayals and conspiracies abound.

A group of palace scholars have been murdered, and it falls to a royal guard to investigate. What he uncovers as the series progresses is a deeper conspiracy. It is best described as a historical thriller, a mix of passion and mystery. The violence is stylized and the writing is suspenseful and clever.

This is the dramatization of the reign of King Jeongjo, 22nd ruler of the Joseon Dynasty. Jeongjo was a good king and helped his subjects as much as he could. The colors and costumes are not as bright here as in other historicals on this list, and the drama seems to have been going for realism. This tale of a young boy's rise to power is gripping and intelligent.

Chronicles the life of Jumong Taewang, founder of the kingdom of Goguryeo, as he tries to take his place on the throne. Highly fictionalized as the details of this period have been lost. 'Jumong' proved to be extremely popular and was part of the Hallyu wave. It was the highest rated drama of 2006. Vivid and at times breathtaking, this drama maintained a high standard of quality throughout each of its 81 episodes.

PAINTER OF THE WIND

Semi-historical (as possible liberties have been taken with the character), the drama revolves around a real-life historical figure who disguises herself as a boy to track down the man who murdered her father. A master painter is adopted as a mentor, and the rest is history. Lighthearted and full of humor and romance, 'Painter of the Wind' sets the bar high for good drama.

THE MOON THAT EMBRACES THE SUN

The drama melds politics, love, and mysticism as a Joseon king falls in love with a shaman.  Falls firmly under the umbrella of historical fiction. Dramatic and beautiful, opulent and brutal, this has as much in common with melodrama as anything.

Obviously, these are just my picks and a small sampling. If this were a limitless list, we would have 40+ dramas up here, and that's just for the Joseon Era. That's my 10, now I want to hear from you guys. What dramas would you put on the list?

Initial accusers of Nam Joo Hyuk refuse to take down the article despite the lawsuit
9 hours ago   48   18,122

Netizens ask why Big Hit Music was so fast in denying RM's marriage rumor but still haven't said anything about V & Jennie
2 days ago   77   38,411

Sunmi will reportedly take over as the new host of 'Showterview', previously hosted by Jessi
2 days ago   58   50,541

Additional veteran musical actors speak up about the issues in the Korean musical industry
3 days ago   62   53,069