10 Indie artists you have to listen to before Summer ends 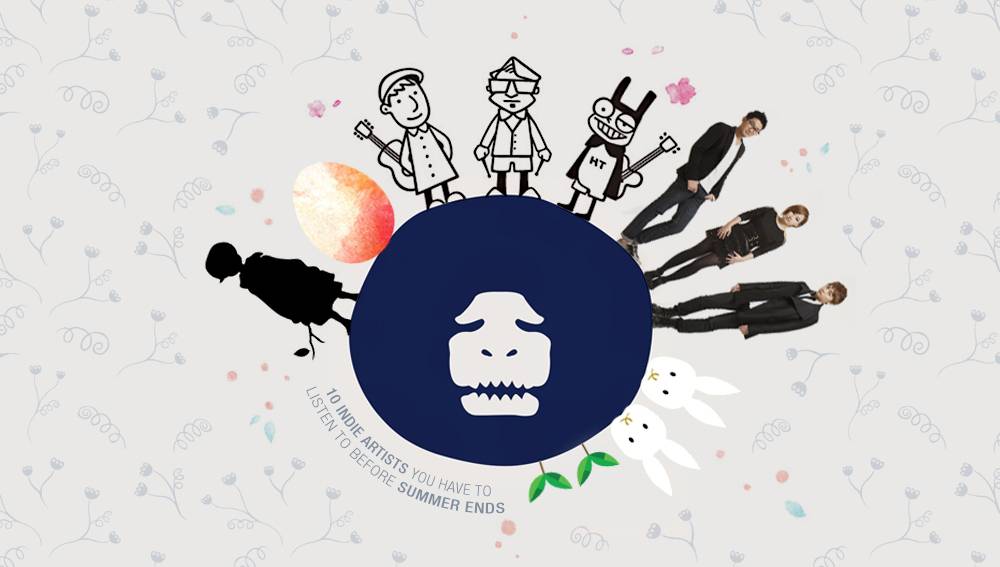 We've hit the last stretch before the dog days of summer officially come to an end. Meaning, good-bye to carefree summer days, good-bye to shorts and sandals, good-bye to summer romances, and (with heavy hearts) good-bye to waking up past noon with neither shame nor remorse.

But we've still got a few weeks left, and what better way to keep summer vibes alive than listening to soothing Korean indie music? The following artists fall under the indie genre because they make music that is independent of major entertainment labels or studios.

We've included a list of our favorite Korean indie groups and their tracks. They're perfect reminders of summertime lightheartedness and lazy days spent outdoors with friends or lovers.

Junkey is a multitalented musician as he's a lyricist, composer, and producer. He released his first album with his friends to commemorate their high school graduation, but the album received an enthusiastic response, hence marking the beginning of Jungkey's professional music career. He doesn't sing the songs himself, preferring to bring in guest singers, but his lyrics and composition style are exceptionally beautiful.

The lyrics and melody to his song, "Alone," addresses a breakup and the painful process of a "we" becoming an "I." Granted, the content isn't all rainbows and frolicking-among-green-meadows, but it's real and you find yourself being able to relate. It's the perfect song to listen to when you're taking a long train ride somewhere by yourself and the weather's a bit gloomy.

Acoustic Collabo X "You and I, Fluttering"

Acoustic Collabo is an indie group that debuted in 2010. The guitarist/vocalist duo is known for their sensitivity in the way they approach their music. Their voices, coupled with the guitar, give the group an airy and fresh feeling. Though their tracks are often quiet, it puts the listener in a relaxed mood. You can't help but to remain fixated by the clarity of their voices.

Their song, "You and I, Fluttering," is a sweet ode to the happy anxiety you feel before you confess to your crush. It's the whole, "Should I do it? Should I not?" dilemma before any confession. In its own sweet way, the music conveys the excitement of young love.

Dalmoon X "Having Nothing is Merit"

Dalmoon is a singing/songwriting female duo. Since their official debut in 2010, the group captured the hearts of many fans for using music to represent the delicate sensibility of contemporary youths. Unlike most groups, they tackle more than just songs with themes like love and breakups. They celebrate the beauty of youth and the bright futures we have ahead of us.

"Having Nothing is Merit" is representative of this approach. They say that though they don't have anything, it neither makes them sad nor bothers them, because they still have their youth and the entire world is theirs for the taking. The song is bubbly, which corresponds to the message the duo wants to get across.

The talented trio of Busker Busker is most famous for its runner-up performance in Mnet's 'Superstar K3.' Their defining charm is the depth of the group's main vocalist. Take a listen to their song, "First Love," and you'll see what I'm talking about when I say you feel as though you're falling into his voice. Oh, and if you were wondering, the content of the song doesn't stray far from the title. It talks about the hesitation, excitement, and clumsiness of first love, and it's all wrapped up in an upbeat tempo, which makes the song even more addictive.

The female duo, J Rabbit, took its name from the year they were born, 1987. That year happens to be the year of the rabbit in the Chinese zodiac. These ladies are receiving much attention and love for their singing/composing talents and their refreshing and soft music style. They actively upload new videos onto their YouTube channel, through which they create an intimate bond with their listeners.

"Happy Things" is a song about the little things in life that can make your day infinitely better. The song's lyrics celebrate the commonplace things you come across and take for granted everyday, and the daily emotions that run through you but are hardly noticed.

10cm takes its name from the height difference between its two male members. They first started playing music together when they met at the same high school. And for the sole reason of wanting to continue to play music with each other, they even enlisted in the military for mandatory service at the same time and at the same branch.

"So Nice" is a feel-good song that lists all the things a man loves about his lady. Everything from the way she snores when she sleeps to the holes in her stockings, everything is so nice~ Perhaps it's his voice or the lyrics or the guitar that makes the song so magical. Whatever it is, it has just significantly raised the standards for men all over the world.

Urban Zakapa is one of those bands you can't stop listening to once you stumble upon them. You know what I'm talking about... right? It's that feeling of coming across a gem without expecting to, leaving you fixated. The name of the group stands for Urban, ZAppy (eye-catching), KAleidoscopic (multicolored), and PAssionate. True to their name, the trio of singers leave an impression with their raw emotions on stage and their chemistry. Each voice has its own color and fuses with the other two voices in a match-made-in-heaven, cue-the-hallelujah-chorus kind of way.

The lyrics to "My Love" tells the story of the feelings and memories that linger after a break-up. Though that theme has been tackled time and time again, take a listen anyway, and you'll see why you won't be able to stop listening to this group. Though each voice is so powerful and distinct, one never seems to overpower the other two.

Afrodino is a three-member indie band that won the YG X Hyundai Card "RE-MONSTER" project. The release of their first digital single, "Chameleon," had eyebrows raising in the indie scene, curious about these newcomers.

Afrodino's self-composed "Chameleon" is a clever metaphor that likens the guy to a chameleon. Meaning, the guy constantly changes to match his lady's preferences. And no matter how many times he does so and no matter how tired he gets, he'd still be colorless without her. D'awww.

Standing Egg is an indies Korean acoustic pop band that debuted in 2010. The band has three members who produce and compose their own music, bringing in guest indies artists to cover the vocals. Listening to "Confession" immediately brings me back to summer, no matter where I am or what season it is. Take a listen, and you'll know why. The song has a sweet melody that reminds you of long car drives to the beach and the vocals are so tender that they melt. The lyrics tell the timeless story of a guy trying to make his way out of the friend-zone as he can no longer stand staying by her side while hiding his feelings. It's very reminiscent of budding summer romances and heightened tensions.

Daybreak's music jumps all over the place - from pop, electric, rock, jazz and latin. Their most beloved track is "Love Actually," and for good reason. This fun song is the classic anthem of pull-and-tug that marks the beginning of most relationships. As things start feeling serious between you two, one joke puts all those feelings into question. Or, as you two start feeling closer than ever one second, it seems she's changed her mind another second. Now when you're actually in the situation, nothing about this push-and-pull is cute, but from a bystander's view, it's so endearing and playful, and the melody and lyrics reflect those fluttering emotions perfectly.

Netizens compare and select which entertainment agency building they prefer out of the Big 4
2 days ago   114   62,506