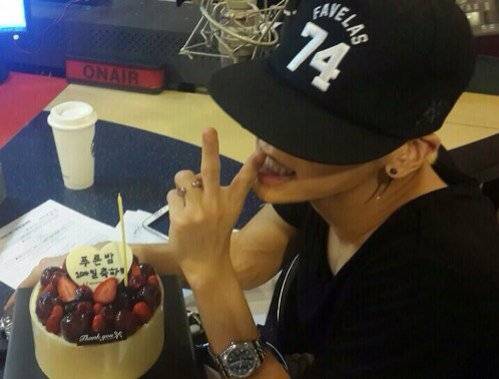 SHINee's Jonghyun celebrated the 100th day since his debut as the DJ of radio program 'Blue Night'!

He wrote on his Twitter on May 13, "It's been 100 days since 'Jonghyun's Blue Night,'" and uploaded a picture.  In the picture, he is in the radio booth, wearing a cap that covers his eyes but not the cute smile as he holds a celebratory cake!

Jonghyun replaced Jung Yeop as the DJ back on February 3.  He had previously stated, "I liked listening to the radio for a long time and wanted to be a radio DJ since I debuted.  I finally get to be one!"

Congratulations to Jonghyun on reaching the 100th day and there will surely be many more great days to come.

Netizens furious to find more autographed albums from various artists listed for sale in an online market
5 hours ago   22   15,115