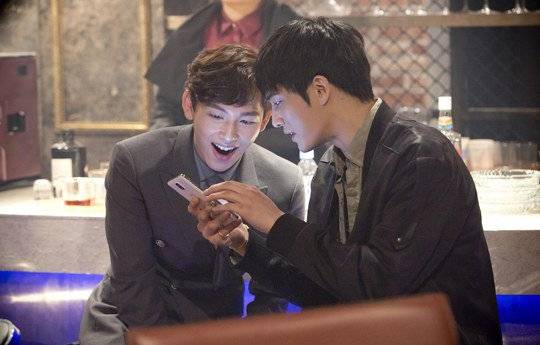 Although Jaejoong and Siwan showed tense relations in MBC drama 'Triangle' as two long lost brothers who lived completely different lives and remain clueless about each other's identity, they proved to be relaxed and close when the cameras were not rolling.

Once the cameras were off, the two of them studied the casino game and gave each other advice while practicing. They even broke into smiles and laughs while looking at something on one of their cell phones for a cute, brotherly moment!

It was revealed that the two of them met up privately a while before official filming began in order to become closer. Jaejoong said, "Whenever we had days without filming, we got closer by meeting up in our spare time to eat and even drink together. Siwan, unlike his appearance, turned out to be a real man."

Siwan said, "Because I got a lot closer to hyung, I feel much more comfortable when we film. I am most looking forward to hyung's transformation when he acts. He really ruined [his image] to no end. It's amazing."

Are you enjoying the drama and their chemistry so far?

TV personality Kim Gu Ra & his wife revealed to have welcomed a healthy baby over the Chuseok holidays
1 hour ago   1   2,720

'The Late Late Show With James Corden' deletes videos of the host calling BTS's appearance at the UN 'unusual' in response to backlash from ARMYs
22 hours ago   137   80,823

Actor Nam Goong Min nonchalantly shuts down rumors of his alleged steroid use by uploading a photo of himself at the gym
2 days ago   59   43,545