Did you know that before his debut in Stray Kids, member Lee Know was active as a part of a backdancer team?

Here are some of the most well-known times during which Lee Know was spotted by fans appearing in BTS content as a backdancer, below!

2. The "Not Today" comeback stage

6. Even in BTS's concert photobook!

According to Lee Know himself:

"I was a backdancer from "Fire" until "Spring Day" and "Not Today". I also went on tour [with BTS]. One time, I ran into j-hope sunbaenim at a broadcasting station. He saw me and said, 'Aren't you Lee Know'?"

Did you know that Stray Kids's Lee Know was a backdancer for BTS for such a long time?

love him, love watching him tho he said himself before that he doesn't like people digging up his BTS backup dancer videos/pictures so we should respect that....

Leave it to Allkpop to not mention whats actually happened this week. Everyone seems to be writing articles except yours truly. Here's a run through:

Skz did a Deadpool inspired performance of Gods Menu mash with Dududu on the recent Kingdom episode and went trending worldwide. The first mnet performance, from Queendom and Kingdom, to get 1M likes in just 3 days. It reached 16M views, as the most watched stage.

In less than a week:

- Access Hollywood did a video about the performance!! (Which was insane)

- Ryan wanted to give chan an official deadpool mask

- Hugh jackman replied to chan saying don't worry Bang Chan, you can keep Ryan. And then saying so "Hi Felix" (these 2 stars fighting over the Aussie line). Hugh jackman followed them on instagram

- Tons of articles, except for Allkpop (im looking at you admin) 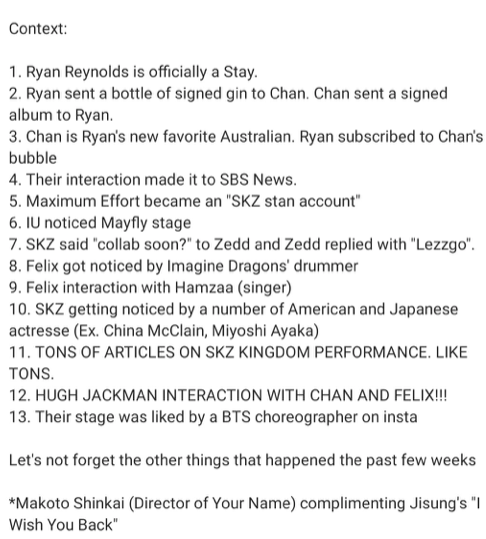 Insiders report that BTS will not be able to attend the '2021 MAMA' due to new quarantine restrictions for overseas travelers returning to Korea
12 hours ago   72   17,875

Officials from the entertainment industry reveal that it was Song Ji Hyo's own choice to cut her hair
2 days ago   58   44,838