According to YG Entertainment on October 3, BLACKPINK's latest comeback title track "Lovesick Girls" has topped iTunes song charts in a total of 57 different countries, shortly after its release!

Just after the release of BLACKPINK's 1st full album 'The Album' back on October 2 at 12AM EST, the girls' title track "Lovesick Girls" quickly rose to #1 on iTunes top song charts in countries including the United States, Mexico, Spain, France, Japan, China, Thailand, and more, for a total of 57 different countries.

In addition, as of October 3 at 8 AM KST, BLACKPINK's "Lovesick Girls" MV has officially surpassed 50 million views - approximately 18 hours after its premiere. Other songs from BLACKPINK's 'The Album' such as "Bet You Wanna" feat. Cardi B, "Pretty Savage", and "Love To Hate Me" were also seen entering the Worldwide iTunes top songs chart. 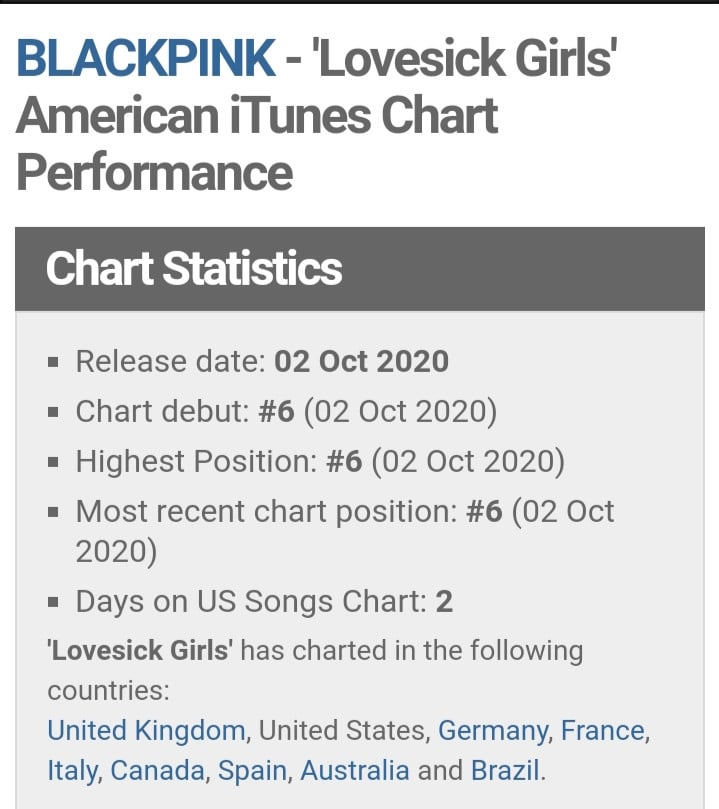 Seriously...yg is such a liar

Nick Jonas says BTS' performance freedom left an impression on him
2 hours ago   5   5,949

Nick Jonas says BTS' performance freedom left an impression on him
2 hours ago   5   5,949

A netizen claiming to be a former classmate of April's Jinsol states she was bullied by the girl group member
3 days ago   98   30,058