'The Butlers' cast members have a friendship interview with their 'Hollywood star' master this week, Ki Hong Lee! 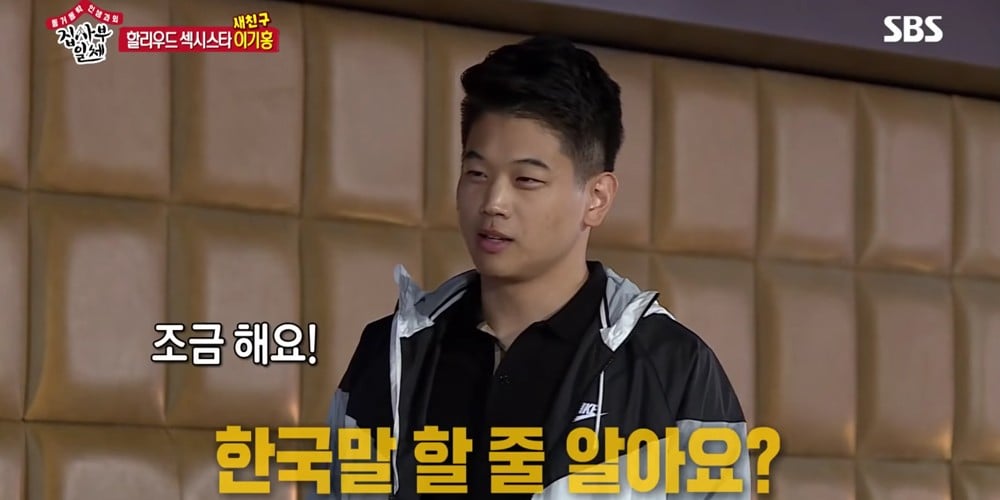 This week's master on SBS's 'The Butlers' is Hollywood star Ki Hong Lee!

On the episode aired on September 26, Lee Seung Gi, Yang Se Hyung, Lee Sang Yoon, and BTOB's Sungjae traveled to Los Angeles, California to meet their new master, who turned out to be Ki Hong Lee.
At first, Ki Hong Lee hid his identity with a hood, showing off his bowling skills(?) silently while the cast members approached. Once the hood came off, the cast members shouted in joy, saying, "'Maze Runner', 'Maze Runner'!".
Afterward, they sat down so that Ki Hong Lee could conduct a "friendship interview" with each of the members based on research he'd done about them! To Lee Seung Gi, Ki Hong Lee pointed out that he was a hyung, saying, "You don't count early birthdays in America," since Ki Hong Lee was born in 1986 and Lee Seung Gi, in early 1987.
Ki Hong Lee then reacted to the other cast members' "American names", including Yang Se Hyung's Vary Vary Yang Se Vary, Lee Sang Yoon's AngLee (combining angry + lee), and Sungjae's Six Cash$.
Watch clips from this week's 'The Butlers' above and below!
Share this article
Facebook
Twitter
0 16,390 Share 100% Upvoted

SHINee's Taemin captured saluting & happily playing the piano inside his military training base
8 hours ago   28   80,077

Hyunjoo reveals she has been sued by two April members for defamation, opens up about the financial strain of facing multiple lawsuits
12 hours ago   79   29,375

Lee Sung Kyung opens up about growing up poor contrary to everyone's expectations
7 hours ago   12   19,452

BTS's Jungkook hands over ownership of his Yongsan City Park apartment, estimated at ~$3.4 million USD, to his older brother
9 hours ago   26   71,695

Netizens show mixed reactions to BLACKPINK member Rose's eye makeup at the Met Gala + wonder if it's a popular trend in the United States
1 day ago   143   61,215

'The Kelly Clarkson Show' receives criticism for showing a photo of a different band when mentioning BTS
2 days ago   85   31,158