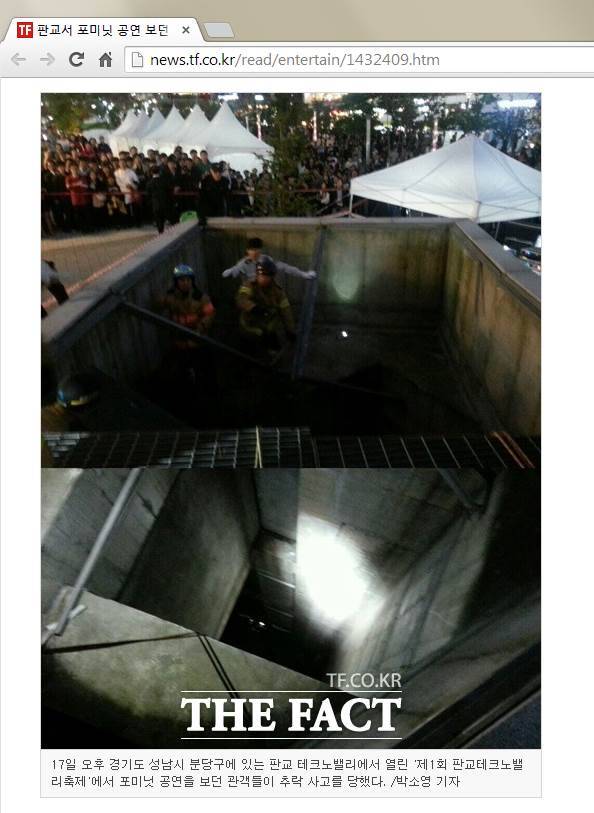 Tragedy struck at 'The 1st Pangyo Techno Valley Festival' on October 17 at 5PM KST with over 20 spectators injured and 2 confirmed dead.

4minute, T-ara, JungGiGo, and Cherry Filter were scheduled to perform, and during 4minute's time on stage, a ventilation grate underneath concertgoers collapsed. Around the time of 4minute's performance, fans reportedly grouped to get a better view on top of a ventilation grate, which eventually gave way due to the weight, causing the spectators to fall 10 meters (~3 stories; 33 ft).

According to reports, police and rescue workers rushed to the scene and have currently rescued 13 victims and confirmed 2 as dead. Workers had to drill through a wall 4 stories below the surface to reach the survivors. An investigation has been started for a more detailed support.

Cube Entertainment has stated that the agency will release an official statement. allkpop sends sincere condolences to those affected.

[Update] Cube Entertainment has stated: "The concert in question wasn't 4minute's solo concert, but other artists also attended. After 4minute's concert, the members and all the staff were not aware that the tragedy occurred and left the venue. It was only when they returned to Seoul that they heard the news about the accident. There is no way to express the sadness we feel. We hope that the incident today doesn't cause great damage to those who attended."

There are now reports that 14 are feared dead and 10 are left seriously injured.

[Update 2] BBC News has reported that there are 16 dead and 11 injured. Twelve died at the scene, while 2 people passed away on their way to the hospital and 2 more passed away during treatment.

[Update 3] More details about the victims have been revealed. Most of those dead and injured are reported to be men in their 30s-40s, but there are also a few victims in their 20s. The 'Techno Valley' is home to a number of technology-related organizations and office buildings, and a large number of employees attended the festival after work. It's also reported that there were 300 security guards for the 700-person event. An insider gave a statement saying that the event organizers repeatedly warned people to stay away from the grate.

AKP BUZZ
Koreans donate to "brother" Turkey for the wildfires after seeing Turkish volleyball players in tears
1 hour ago   12   6,192

Employees at a Chinese company allegedly fired for discussing the possibilities of having Kris Wu represent the brand
4 hours ago   22   9,601

AKP BUZZ
Koreans donate to "brother" Turkey for the wildfires after seeing Turkish volleyball players in tears
1 hour ago   12   6,192

BLACKPINK's Jennie gains attention for wearing a chain accessory around her thin waist, netizens predict it will start a new fashion trend
16 hours ago   87   85,866