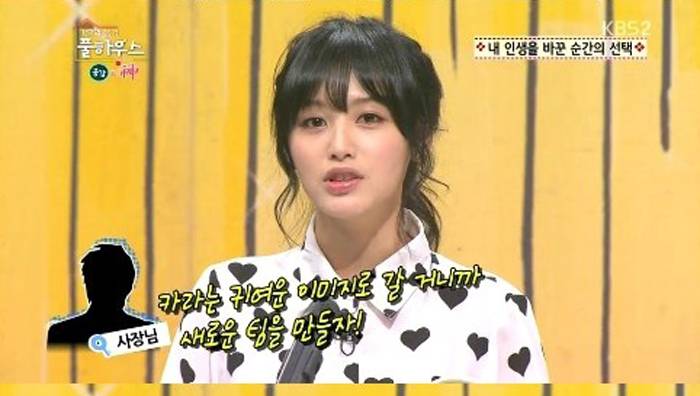 Yesterday, it was revealed that Rainbow's Jaekyung took part in filming for KBS 2TV's 'Full House' and told a story about how she originally was going to be a member of KARA.  However, as the episode aired today, she further revealed that not only was she offered to be in KARA but she was also offered to join SM Entertainment, hinting at the possibility that she may have joined Girls' Generation.

Jaekyung said, "When I became a trainee at my agency ten years ago, I almost became a KARA member.  However, the agency said, 'KARA's going to go for a cute image, so let's make a new team.'  That is why I continued practicing.  When I was getting tired of it, the time to recruit KARA members came.  At that time, the agency said, 'You want to debut in KARA by any chance?  Then, you could debut right away.' It was tempting, but I turned it down because I thought I would be happy with my Rainbow members."

Jaekyung continued, "No one knows this, but truthfully, I was contacted by SM Entertainment, too.  I also turned them down.  And then two months later, Girls' Generation made their debut," surprising everyone.

She was asked if she ever felt envy towards her label mate KARA.  She replied, "Truthfully, I was a bit envious when KARA became a Hallyu icon."

Do you think Jaekyung made the right choice to stay with Rainbow?

Minister of Culture, Sports, and Tourism says, "I will definitely write a recommendation for BTS to postpone their enlistment"
10 hours ago   93   10,830

Kang Daniel announces his upcoming VR fan meeting event, in celebration of his two-year anniversary as a solo artist
26 minutes ago   3   254

Girls' Generation's Taeyeon says she is most drawn to these rookie girl groups
44 minutes ago   2   2,932

Minister of Culture, Sports, and Tourism says, "I will definitely write a recommendation for BTS to postpone their enlistment"
10 hours ago   93   10,830

aespa's 'Next Level' dance practice video under fire for alleged sexualization of office workers
19 hours ago   129   43,755

Aespa fans furious as the girl group's MelOn profile is terrorized by trolls after reaching number 1
1 day ago   182   23,447