Just a few hours ago, a debate was sparked over a choreography seen involving the popular 'New Thing' challenge.

On October 10, a netizen uploaded a post containing a fancam of ATEEZ's Wooyoung dancing a part of their song "Say My Name" during a dance break in "The Real." The move was preceded by Wooyoung making a 'copy' gesture used by street dancers to signal that the following move was originally created by another dancer.

This debate began when fans noticed a similarity between the dance moves done by Vata to Zico's latest song, "New Thing." ATEEZ fans claimed that Wooyoung had made the 'copy' gesture to call out that the opponent's moves weren't original and that he was indirectly conveying a message that the moves from "New Thing" were originally from ATEEZ's "Say My Name."

With the ongoing debate, ATEEZ's choreographer, Anze Skrube, who created the move, responded through his social media. He shared various fan posts that pointed out the original choreographer and even tagged Vata and ATEEZ in their respective Instagram stories.

Anze Skrube even clarified through the comments that he and two other dancers, Josh Smith and Johnny Erasme, created that move together. 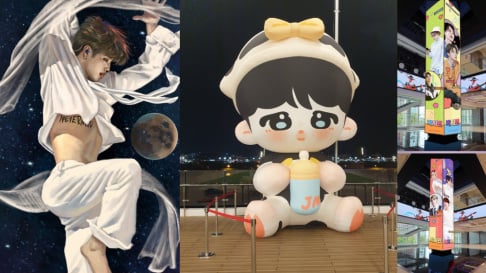 The dance move is an iconic memorable move and one of the killing points in Say My Name. Ateez has a strong team behind them from producing to choreographers. NO one whos an ATINY said ATEEZ created the move. Some of you are reading wrong. Everything that has been created FOR Ateez is unique and individual to them.

I am glad the original choroegraphers for that dance and move are speaking up to back Ateez. As many have said Ateez has let so much go but some things just can't be let go. The anti's are always quick to shit on Ateez but i guarantee if this was a big 3/4 group ya'll would be in an uproar.

Just because Ateez comes from a small company doesn't give people the right to take from them. They have worked just as hard as others to make a name for themselves. Stop shitting on them for doing it.