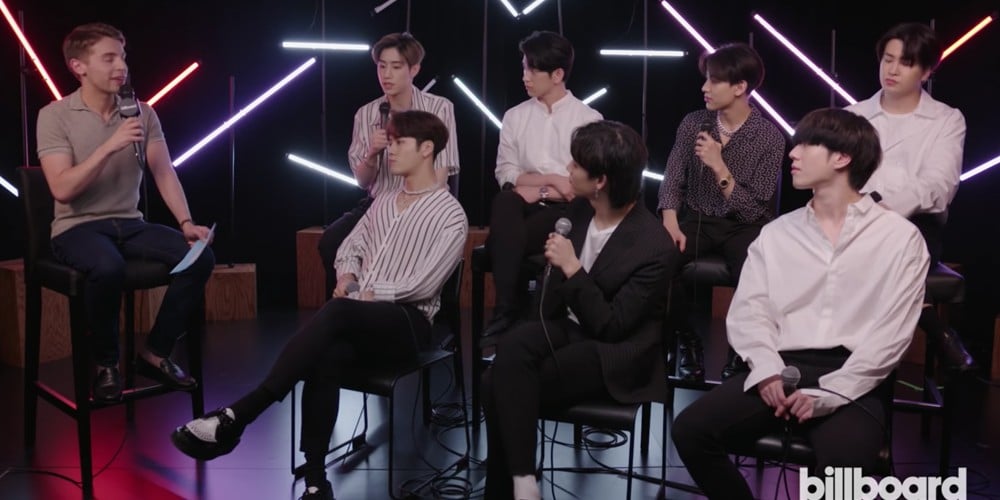 On July 10, GOT7 visited the 'Billboard' studio in New York City for an interview about their ongoing 2018 world tour 'Eyes On You'!
The members discussed what they've been up to during the U.S. leg of their world tour, the excitement of having hi-touches with fans, their most memorable concerts, and more. Further into the interview, the topic of GOT7 being the first ever K-Pop group to hold a solo concert at Barclays Center came up. The boys will be performing at Barclays Center on July 11 at 8 PM KST, greeting fans in a huge arena home to basketball team Brooklyn Nets, ice hockey team New York Islanders, and more.
BamBam shared, "It's an honor, and then we feel like as K-Pop artists, I feel other groups can get energy from us too... K-Pop is not just GOT7. We are all family. Us, other groups, even from different companies and stuff. We're starting right now, and later, we can make K-Pop bigger, and then other groups can come and perform here too..."
According to Jackson, GOT7 is currently preparing for their next album as well. The idol said that he is not allowed to give any specific details, but that, "When we come out, it's just like BAAM! There are no spoilers, no teasers, nothing, like we come out."
You can check out the full interview above! Who's going to see GOT7 during their world tour?
Share this article
Facebook
Twitter
0 37,271 Share 100% Upvoted

Netizens debate whether ITZY's Yuna looks better with or without bangs
1 hour ago   2   1,263

Red Velvet's Joy shares gorgeous behind photos from her drama set in a wedding dress
2 hours ago   7   1,620