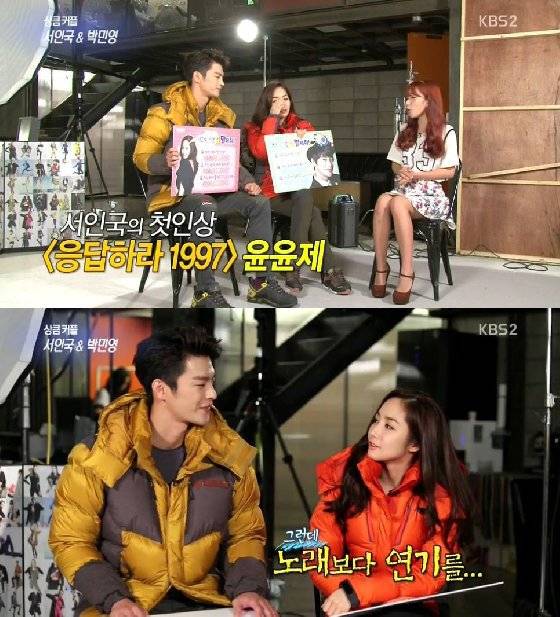 Seo In Guk and Park Min Young showed their chemistry on the set of their photo shoot for outdoor apparel brand 'ISENBERG' on 'Entertainment Relay'!

On the August 16th broadcast, Park Min Young revealed her first impression of Seo In Guk, "I didn't know that he debuted as a singer. He [acts] so well", mentioning his hit tvN drama 'Reply 1997'. Seo In Guk also revealed his first impression of Park Min Young, "To be honest, she is an actress so it was difficult [to approach her]. But even when I make small jokes, she smiles and laughs so well so when I filmed with her, it was very comfortable. Since she is so beautiful, it was difficult [to approach her]."

Park Min Young also shared a funny episode, "During our first filming, I made a big mistake. We did very active and dynamic poses together, but I [accidentally] went like this", demonstrating how she accidentally punched his face while getting caught up in the energetic concept. She continued, "I was taken back by surprise and was very sorry, so I told him, 'In Guk sshi, I'm so sorry.' But he was so cool about it, saying, 'It's okay. It's nothing.'"

He also chose Park Min Young's height as one her charms which got the actress curious and he later explained, "I watched 'City Hunter'. When I watched it, she was in fitted formal wear so I thought she was tall. But upon meeting her in person, I felt like I wanted to hug her [because of her petite frame]."

Check out their interview above!

CJ ENM asks n.CH Entertainment to hand over TOO without any more trouble in an official press statement
4 hours ago   8   4,359

WayV members angrily share photos of the Sasaeng fans who followed them to an undisclosed filming location
7 hours ago   32   25,908

HyunA unveils an intimate teaser film, describing the concept of her 7th mini album
1 hour ago   1   1,009

AKP BUZZ
Korean Mukbang YouTuber is fired from her Chinese agency after saying "Kimchi is a Korean food"
11 hours ago   82   67,956

Mina lashes out at netizen demanding proof that Jimin bullied her, posts medical diagnosis from hospital
1 day ago   227   47,858

All Witnesses Denied Seungri Involvement, Saying Police Tried To Force Them Against Seungri
2 days ago   162   36,071