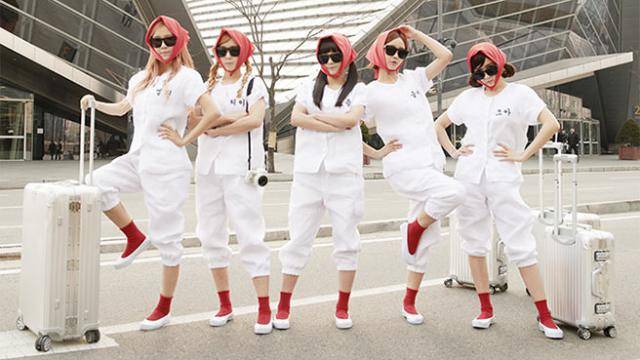 Crayon Pop's "Uh-ee" has been deemed unsuitable for broadcast by the ever-so-strict KBS during the first review, so with some modification, the agency hopes to pass the second review.

Their agency Chrome Entertainment CEO Hwang Hyun Chang told Star News on the 3rd, "We were notified that ['Uh-ee'] was deemed unsuitable for broadcast by KBS so we modified the problem lyrics 'bbikka bbunjjuck' to 'bbunjjuk bbunjjuk' and submitted it for reconsideration."

KBS stated on the 2nd, "Among the lyrics, 'bbikka bbunjjuck' is a Japanese expression". Although the expression just refers to something sparkly or shiny, since the broadcast station is pretty strict on enforcing proper spelling and expressions of the Korean language as it is funded by the government, Chrome Entertainment was asked to modify the expression to the corresponding Korean phrase.

"Uh-ee" won't need any changes for SBS and MBC as it has already passed the reviews there.

'The Late Late Show With James Corden' deletes videos of the host calling BTS's appearance at the UN 'unusual' in response to backlash from ARMYs
2 days ago   142   90,161