News
Posted by AmieAmore 21 days ago

On March 26th, Heung Il Funiture announced on its official website that they will be retracting their sponsorship for the drama stating, "We have belatedly encountered the issues related to the sponsorship for 'Snowdrop' on a community website. We have requested for the name of our company to be removed from the sponsor's list that is listed on the drama's webpage. We apologize for causing concern by not paying close attention to the issue."

During a phone interview with Sports Kyunghyang, an official of Heung Il Furniture explained, "The drama did not provide any details of the plot and requested a sponsorship. At first, we did not want to provide any sponsorship, but after much persuasion, we agreed to sponsor the drama at the end of December. We only knew the layout of the film set and the names of the actors appearing on the drama."

The official continued to say, "I didn't know much about the controversy of the drama, but then I found out about the 'Snowdrop' plot controversy from my children. So we have decided to cancel the sponsorship. We have already notified the drama of our cancelation, and they will return our furniture in May."

The company official then concluded by saying, "I didn't know so many people would gather their attention to us." In fact, the company website was shut down temporarily due to the number of visitors that flooded the site.

Meanwhile, there have been controversies with dramas distorting history that netizens are continuing to criticize. Drama 'Joseon Exorcist' has met cancellation due to the rising controversy. The SBS drama lost sponsorships from various brands after its controversy over historical inaccuracy.

This time, 'Snowdrop' has been criticized for its inaccurate plot. The story of 'Snow Drop' is set in 1987, a significant year in South Korean history. The year was marked by countless protests led by university students demanding fair democratic elections. Numerous university students endured oppression by the National Intelligence (highly controlled by the dictatorship at the time) and sacrificed their lives. In June of 1987, South Korea held its first "officially democratic" presidential elections. The student protests of 1987 are known to have "paved the way for South Korea's democracy." Many student protestors were actually captured, tortured, and murdered by the National Intelligence as these students were accused of being "spies" when they were mostly innocent.

However, Jung Hae In plays the lead male character who is alleged to be a "student protester" Lim Soo Ho, who later turns out to be a spy. Jisoo plays the role of a young nursing student, Eun Young Cho, who takes in the injured Lim Soo Ho and hides him from authorities, believing that he is a student protester.

Here, many netizens pointed out that the male surname "Lim" used for Jung Hae In's character and the name "Young Cho" used for Jisoo's character are both taken from real-life figures who were student protestors at the time.

After the controversy surfaced, Heung Il Furniture is the first company to pull its sponsorship. Many netizens are praising the company for its quick measures and response. Netizens are commenting, "That's a good company," and "I should buy their furniture in the future."

This whole issue is given more context and addressed much better by AskAKorean, who is one of the best and most respected Korean-American voices online when it comes to this stuff. I've copied his recent tweets here.

Alright, let me start from the top. This is about the proposed Korean drama to air on Netflix and JTBC, called "Snowdrop" 설강화.

Synopsis: Seoul, 1987, in the middle of the democracy struggle. Male lead Su-ho, a Korean-German, staggers into a women's university, covered blood. Female lead Yeong-cho takes him in and treats him, thinking he is a democracy activist. They fall in love.

Unbeknownst to Yeong-cho, however, Su-ho is not a democracy activist; rather, he is a North Korean special agent. Male sub-lead Seung-jo, a principled and noble agent of South Korea's National Security Planning Agency, tries to intervene for Yeong-cho.

Hope you're seeing the problem here.

And S Korea's military dictatorship justified all this because, according to them, the democracy activists were all communist spies from North Korea.

So here we have a TV drama that says: South Korea's democracy activists were secret communists and NSPA was trying to stop them.

And Blackpink fans are signing onto this because Jisoo is playing Yeong-cho in this drama. Seriously guys, get off this bus. It doesn't go where you want it to go.

Is this all just a big misunderstanding, an unfortunate overlap in events? No! There are so many far-right dog whistles planted in every corner of this synopsis, starting from character names.

"Yeong-cho", for example, is a clear reference to Cheon Yeong-cho, a legendary woman democracy activist. She was a student at Korea Univ and a huge figure on feminism and organizing women students for democracy. Her name is now used as a naive woman duped by a NK spy.

Here is a still from the production set. It occurs at a fictional women's college called "Hosu Women's Univ". The banner on the top says "Liberation Hosu" 해방호수 - this is a reference to Ewha Womans Univ, whose democracy era nickname was "Liberation Ewha". 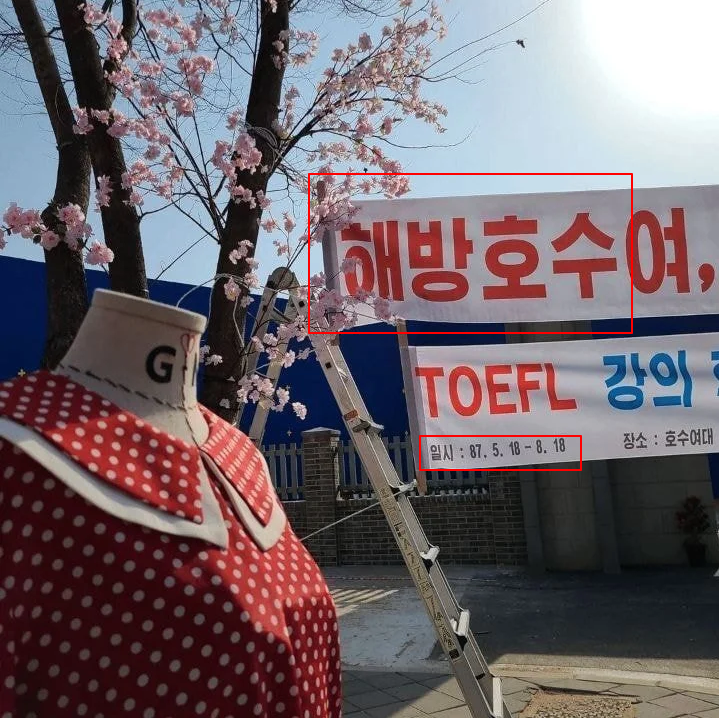 Also, check out the dates at the bottom banner, which is supposedly advertising for an English held from May 18 to Aug 18. May 18 is the date of the Gwangju Massacre (which is referred to as the "May 18 Movement".) Aug 18 is the date of Kim Dae-jung's death.

This is not something a Korean person can do by accident. "May 18" resonates among S Koreans like "9/11" does for Americans. If you're making a drama about the dictatorship period, you're not putting in "May 18" by accident. You're just not.

So again, Blackpink fans - get off this bus. You don't want Jisoo involved in this. Ad sponsors for this show are already beginning to pull out. This will be an incredible black mark for the careers of everyone involved. Hit "EJECT" now, it's not too late.

And now the rest will slowly start to follow. All it takes is one.

Netizens say G.NA was unlucky for being caught in a prostitution scandal
28 minutes ago   6   4,279

Two plastic surgeons are in a difficult position after claiming that it's not Seo Ye Ji in the graduation photos
3 hours ago   34   18,878

BTS’s Jimin causes social media frenzy after the release of his ‘Film Out’ Spotify canvas footage and ‘BTS, The Best’ album jacket photos
16 minutes ago   4   411

Netizens say G.NA was unlucky for being caught in a prostitution scandal
28 minutes ago   6   4,279

Yoon Jong Shin talks about the behavior of netizens and how they feel empowered when they see someone fall from grace
51 minutes ago   15   2,456

AKP BUZZ
A visitor at the Sewol Ferry Memorial leaves a 'Nike' gift after hearing a heartbreaking story
1 hour ago   5   2,666

"There was always laughter around Seo Ye Ji," film director Seo Yoo Min praises the actress in light of the recent controversy
22 hours ago   96   37,724

Seo Ye Ji's former friend exposes the actress' alleged bad behavior in Spain & her statements about inhaling smoke for 'Another Way' come to light
1 day ago   131   98,117

Complutense University of Madrid makes a statement about Seo Ye Ji's alleged acceptance into their university
2 days ago   133   146,172