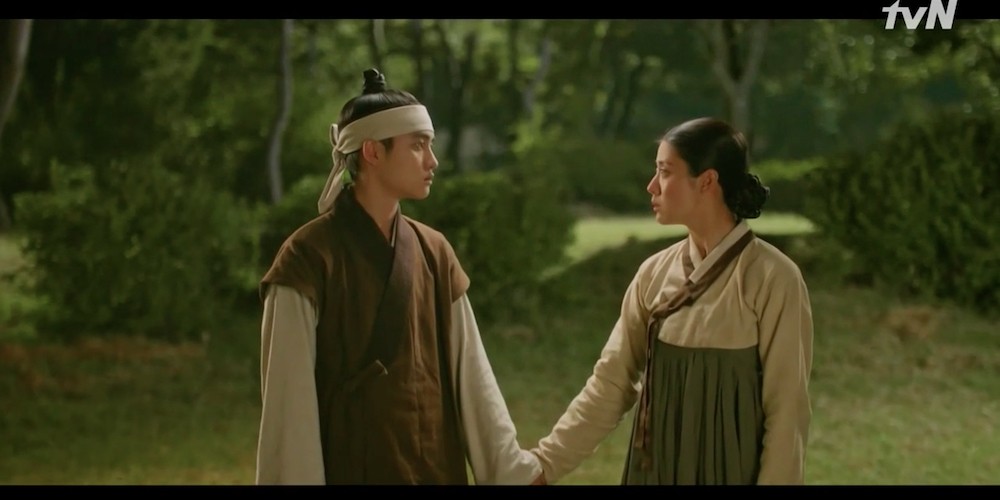 Some real, REAL business got right down in episode 6 of '100 Days My Prince'!

So on this episode, our main heroine Hong Shim (played by Nam Ji Hyun) and her useless husband with memory loss Won Deuk (played by EXO's D.O.) go out to the markets, where Hong Shim runs into... DUN DUN DUN... her long lost brother, the black assassin Moo Yeon! 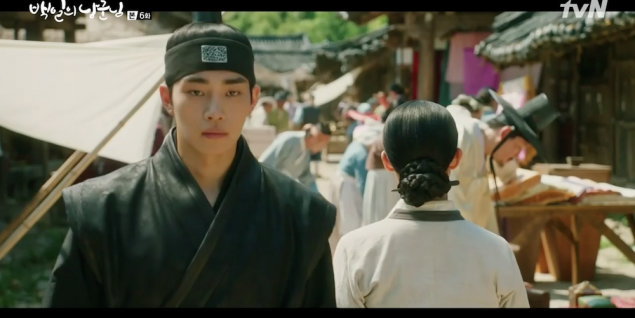 Don't pay attention to me, I'm just a really tall, really dark, really handsome guy strutting along this peasant market like I belong here when I clearly, don't. 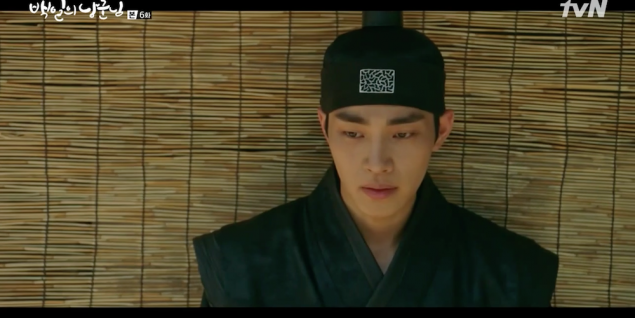 Dammit, how did she notice me in that crowd??

So even though Moo Yeon tries to thwart Hong Shim, then tries to lie that he's not the person she's looking for, Hong Shim uses her wits to make Moo Yeon fess up the truth, and why he hasn't shown up to the bridge on full moon nights for the past 10 years. The siblings embrace in tears as they learn that they both managed to survive, but unfortunately, Moo Yeon is no free man. He's bound to our main antagonist Kim Cha Un as a servant dog, and his final task before freedom is to find and kill... the crown prince. 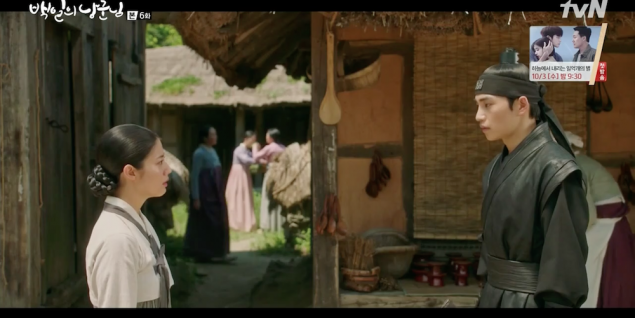 Honestly, I've always wondered if I would be able to actually recognize some important family member if I'd lost them in my childhood. I don't think I could. 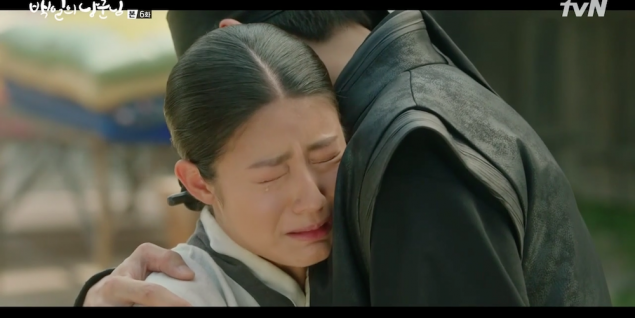 It was great to have one character (who is not one of the two main characters) finally riddled out in this story full of characters with their own hidden agendas. Now we know who Moo Yeon is, where he came from, what his goals are, and the tasks that he must fulfill in order to achieve his goals. For now, let's just set aside the fact that he's a murderer with a lot of blood on his hands, and his ultimate target is our main protagonist, Lee Yool/Won Deuk. Moo Yeon is a tragic character in his own right. The boy couldn't help but become a subordinate to the evil man who murdered his family, for the sake of keeping his promises to his deceased father and surviving sister. Everything he's done, was for the sake of his loved ones. Unlike our other antagonists, like Kim Cha Un, the princess consort, the queen, etc, Moo Yeon isn't evil, and I hope to see him joining the protagonists if possible.

Back at the palace, Kim Cha Un is darting around on his toes, trying to keep anyone and everyone from finding out that the corpse he brought back with him does not belong to the crown prince. 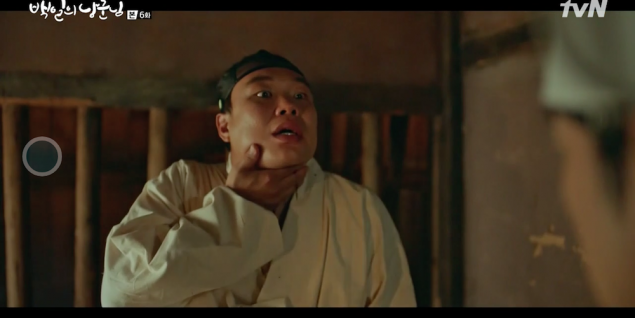 Just gonna pop this packet of blood I've been hiding in my palms...

The crown prince's royal attendant, who was sick and forced to stay home while the prince went off to the mountains, recognizes that the corpse does not belong to the real prince. The poor man, who truly cared for the prince, tells no one about his revelation for fear that he may inform the wrong sources... unfortunately, the wrongest source he can ever hope to confide in also happens to be the royal advisor with the highest rank and power: Kim Cha Un. And thanks to that, Kim Cha Un slits his throat without as much as a blink, eliminating the only clue that the prince isn't actually dead! 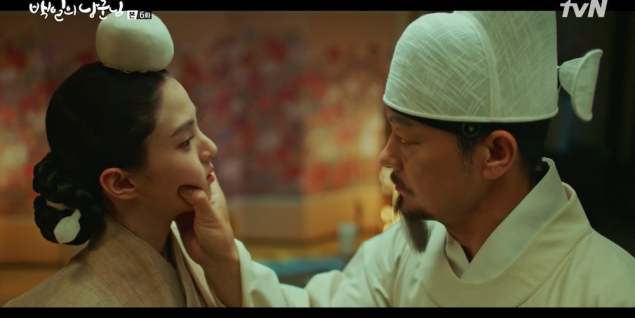 Briskly paying a visit to the princess consort's quarters after committing the murder, Kim Cha Un grasps his daughter by the face and says something along the lines of, "I never wanted to shed blood again after that night (Assuming this means the night he killed Hong Shim's family), but you forced me to kill once again." Apparently, this means that Kim Cha Un decided to kill off the crown prince so that it could somehow explain the princess consort's pregnancy..?

Wow that really doesn't add up to me yet. Anyone are to explain? In general, the next task that Kim Cha Un gives his daughter is to kill the real father of her baby. It may just be the biggest secret we have to solve in this series: who is the father? I literally have zero guesses to the answer right now. And then so once that deed is done, are they going to play it off like the baby in the princess consort's womb is the prince's child?? Fishy... 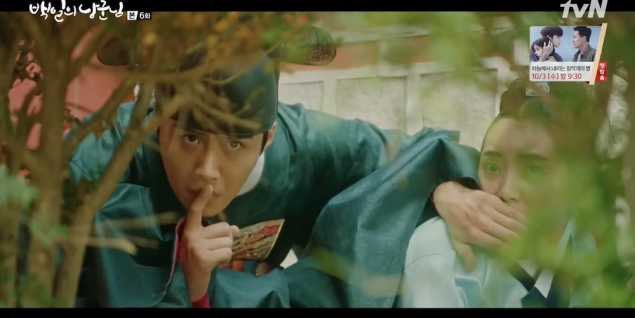 Quiet, woman! Quiet, me!
Aside from Kim Cha Un, the queen is showing some very suspicious movements of her own. For reasons unknown, she's ordering all of her subordinates to look for something in the princess consort's quarters, and I didn't quite understand what it was that they were so fervently looking for.
Oh, and remember how Hong Shim was finally able to meet up with her long lost brother? Reflecting back on the good fortune that came her way, she can't help but remember that the police chief Jung Jae Yoon (played by Kim Sun Ho) wrote her wish on a paper lantern and sent it off down the river, and the wish ultimately came true. While Jung Jae Yoon is sneaking into Hong Shim's heart without even being in her sight (not to mention ours!), what the heck is Won Deuk doing exactly, to win her over? 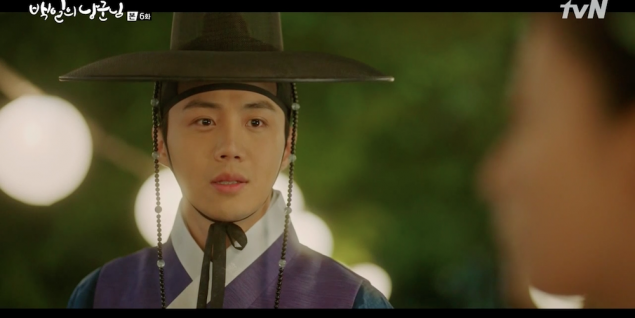 He shoots, he scores!

Won Deuk is picking flowers stained with dog pee, trying to give them to Hong Shim to try to get on her good side... Okay okay, jokes aside, Won Deuk is proving himself to be more useful day by day, AND he's also trying very hard to be a better husband for Hong Shim. 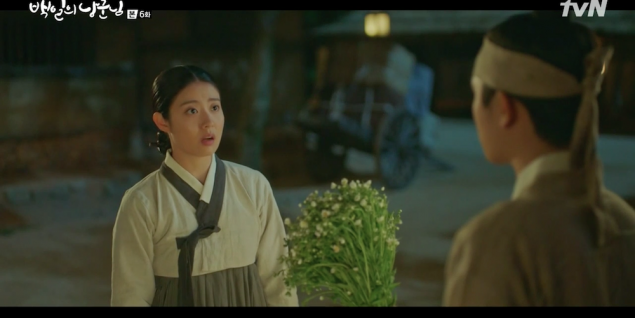 A dog pissed on those flowers, Won Deuk! 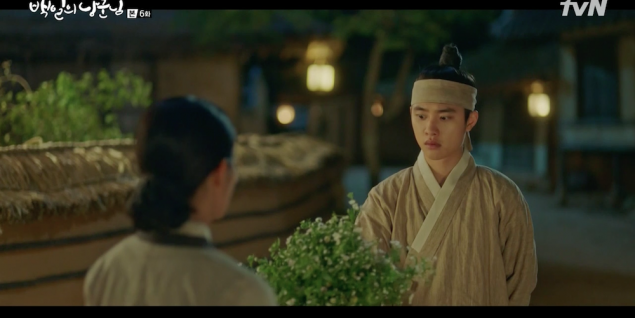 Eating worms, touching dog piss flowers... the outside world is a dangerous place.
Finally, at the end of episode 6, we find Won Deuk being hired out to pretend to be the lover of a rich, aristocrat woman. But while he's away, some mean, angry men come, destroy the Yeon's home, and kidnap Hong Shim! I assume the men were sent by that old geezer who tried to make Hong Shim his 5th wife. How will Won Deuk show off his manliness and princely skills to save Hong Shim from danger? We'll have to wait until episode 7 to find out! 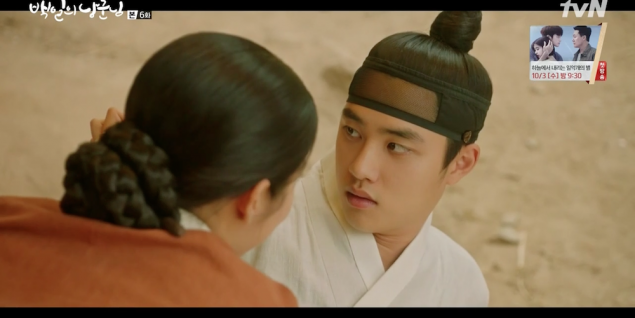 Never hide money from your wife, Won Deuk.
In terms of plot, I think that we're really moving along here, but at the same time, there are still so many mysteries unsolved and so many questions unanswered! Not to mention, the antagonist Kim Cha Un is literally getting away with EVERYTHING and things are looking bleak for our heroes... So one more point for plot this week, and hopefully, '100 Days My Prince' can up that score some more soon! 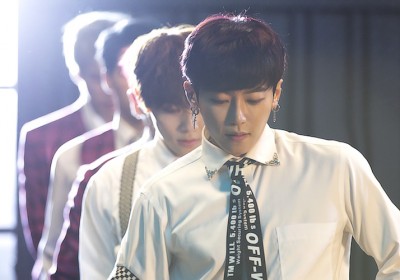 AlphaBAT to make a comeback with a new member! 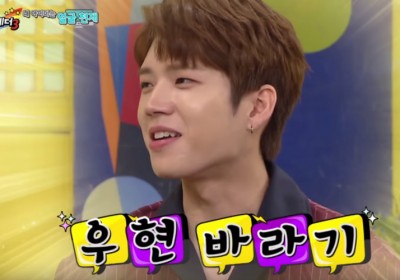 The fierce competition for this year's 'Rookie of the Year' award — which girl group do you think will win at the year-end award shows?
29 minutes ago   12   1,799

Countdown to BLACKPINK's pre-release "Pink Venom" with a Livestream on YouTube
44 minutes ago   5   1,308

Netizen suggests set of Girls' Generation's 'FOREVER 1' MV may have been plagiarized from Tokyo DisneySea
1 day ago   51   38,485

Previously unseen photos of Kim Garam show up on the web through an unknown Twitter account
3 days ago   87   113,867