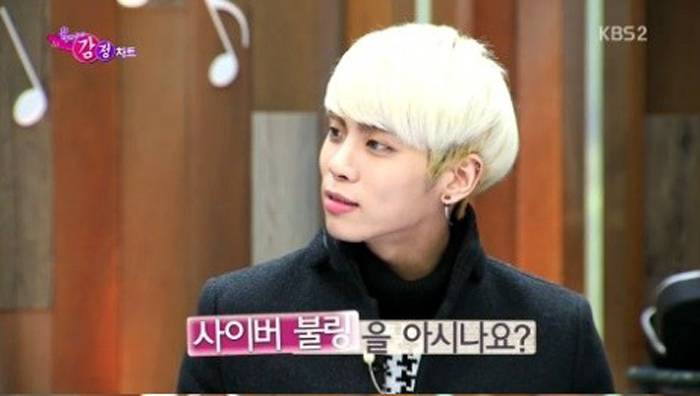 SHINee's Jonghyun appeared as one of the first MCs on KBS 2TV's pilot program 'Music Show.'  For a week, the five MCs will discuss issues that affected them in some way or another.

One of the things they talked about was the growing problem of cyber bullying.  During this discussion, Jonghyun surprisingly revealed that he had been bullied before, as well.  He said, "I once experienced being an outcast in middle school.  I was in the band during middle school so I attended a festival at a girl's school and got a little bit famous; consequently, the sunbaes called me over and hit me.  Their reason was that they did not like how I looked at them."

He continued, "At that time, I did not tell my parents.  That did not end after just one time."

He also talked about his habit of purchasing a new cell phone after breaking up with a girlfriend.  He was asked whether he erased all the pictures after he ended a relationship.  Jonghyun responded, "I just get a new cell phone."

Yoo Se Yoon asked, "Do you put the other cell phone aside then?  Does the number of cell phones equal the number of women you've dated?" making Jonghyun flustered and everyone else laugh.

Jonghyun said, "I heard if you erased pictures, people can pull them back up again. I'm definitely not saying I have pictures of us together.  There might be messages remaining so I get a new phone."  He also said how he did not feel like he had to erase past photos with his ex-girlfriend, but another MC suggested the next girlfriend might find these photos.

Jonghyun said, "That's bad," and Yoo Se Yoon again went into his joke with the cell phone collection.  Pretending to be the girlfriend, he asked, "Why are there so many cell phones?" and went "Omo," while acting as if he kept opening up new cell phones out of his collection and seeing past girlfriend photos to everyone's amusement.

Popular webtoon 'Summer Solstice Point' confirmed to be remade into a drama
4 hours ago   16   9,510

BTS show their support for South Korea at the 2020 Tokyo Olympics, by providing free-of-charge music videos of 'Butter' & 'Permission to Dance'
4 hours ago   6   5,987

How netizens are reacting to Irene in the latest teaser released for Red Velvet's comeback
15 hours ago   68   37,457