SPOILER
Which popular 'Produce' alum says he wants to be famous more for his skills than his looks on 'Mask King'?

Another alum from the 'Produce' franchise was revealed as a contestant on 'Mask King' this week!

On the April 12 KST episode of the MBC singing competition, 'Fire Friday' made it all the way to the third round of the competition, where he competed against 'Hamster' with a performance of "To You" by Seo Taiji & Boys. Unfortunately, he lost out on the opportunity to advanced to the final round, being forced to unveil and reveal his identity as Kim Woo Seok, known to K-Pop fans as a popular vocal and visual appearing in both UP10TION and 'Produce X 101' project group X1.

During the reveal interview, Kim Woo Seok explained that he came onto the program out of a desire to receive recognition for his vocals instead of his appearance.

When asked if he predicted he would be eliminated in the third round, he responded, "I didn't expect it at all. Today was a satisfying day simply because I was able to do all three songs that I had prepared. Because there hasn't been a song with just my voice on it, I wanted to receive verification and break that trauma myself."

During another part of the exit interview, he was asked to perform his hilarious sexy dance to trot veteran Nam Jin's "Bumble Bee" one more time for the audience.

Once he was finished, he spoke about his future plans, stating, "The first thing I want to do is connect with my fans through a solo album, so I'm preparing diligently. I hope that we can communicate often."

Check out Kim Woo Seok's performance and interview from the April 12 episode here!

Fans knew all along that it was him! He di so well. Woiseokie🥰

It's okay, I don't look at kpop artists for their looks

Jessica's new novel 'Shine' under controversy over elements that allegedly refer to Girls' Generation
20 hours ago   82   64,663 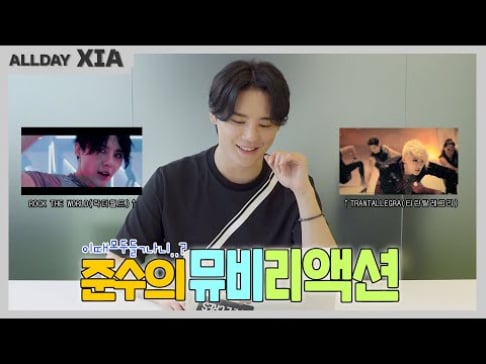 BTS V’s Vietnamese fanbase celebrates the opening of the new school year with bounteous donations to kids in need.
11 hours ago   6   2,822

Only 6 SM idols have ever achieved the unlikely odds of debuting through the agency's weekly 'Saturday Open Auditions' in the past 20 years
12 hours ago   45   30,190

Hyoyeon reveals which Girls' Generation member she thinks will marry first
3 days ago   17   38,390