Tickets to BTS PERMISSION TO DANCE ON STAGE – LA would not be available to the general public due to overwhelming presale demand.

On October 9th, Ticketmaster announced that they won't be selling public on-sale tickets to BTS's concert at SoFi Stadium in Los Angeles, California. Following the last general verified fan presale on October 8 at 3 to 10 PM PT, the company notified that there aren't any remaining tickets for general public on-sale which was originally scheduled to take place on October 9 at 3 PM PT.

It was reported Ticketmaster released tickets for seats that had limited views for sale due to overwhelming demand, but those seats were sold out as well.

Meanwhile, BTS will be running four shows of their concert in LA on November 27th and 28th, and December 1st and 2nd.

Were you able to secure your spot?

I wish they could have a no resale rule or something on these concert tickets, cuz people be buying a bunch just to resale the ticket at a higher price and make money off of it.... Probably won't ever happen but it sucks to see when genuine fans who can't get a ticket and will have to spend 4 or 5 times the amount of the price the tickets were originally sold at just to see their favourite group/singer.

They prioritized selling to scalpers before actual fans.

And those scalpers are bragging about the resale price. 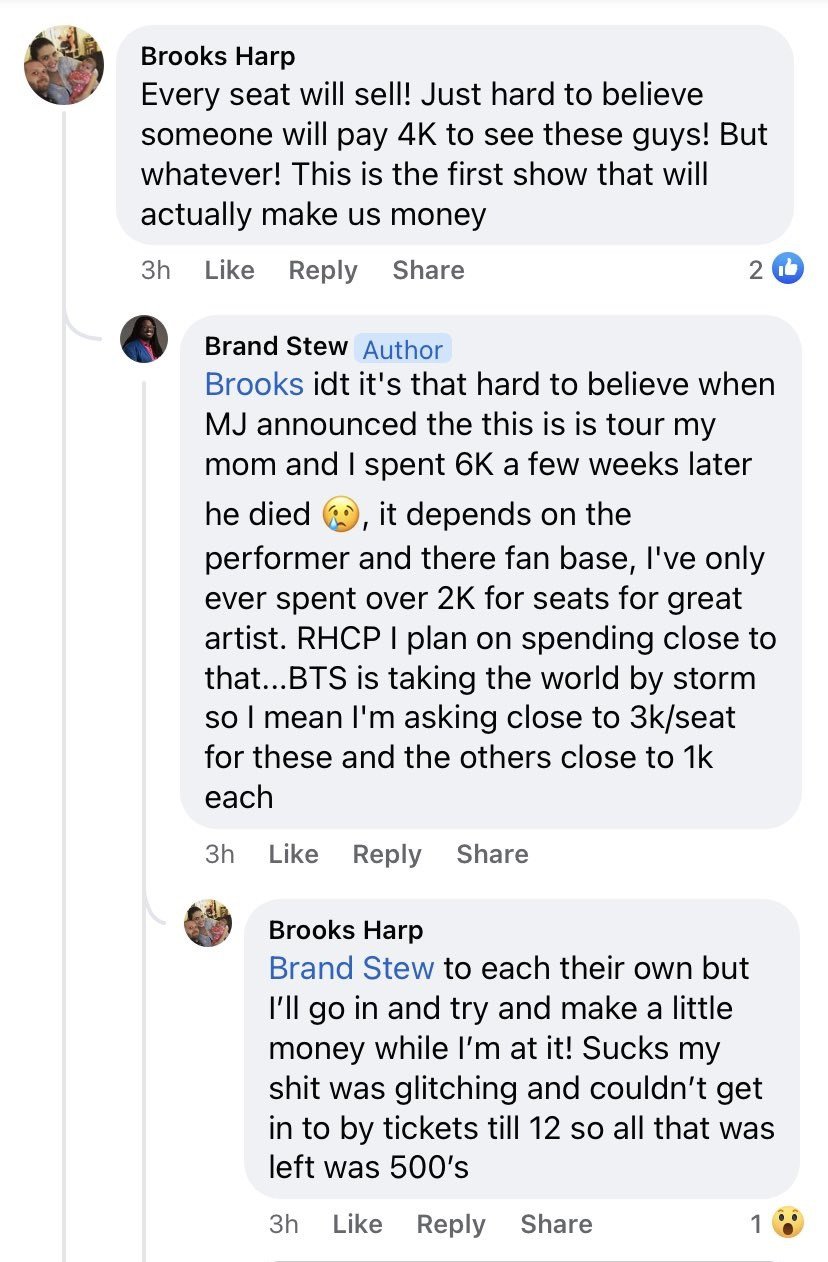 Kim Yong Ho, the infamous YouTube reporter from 'Garo Sero Institute,' is being sued for allegedly molesting a woman
4 hours ago   15   3,464

How Korean netizens are reacting to the voice recording that revealed Kim Seon Ho's ex-girlfriend cheated on her husband with 3 men
7 hours ago   73   69,868

Park Bo Gum gives an update six months before he is discharged from the military
2 hours ago   3   4,271

Declining birth rates in South Korea will make it harder to find talented idols in the future
1 day ago   93   28,161

'Dispatch' questions the validity of the claims made by Kim Seon Ho's ex-girlfriend + reveals Kim Seon Ho cooked seaweed soup after learning of the pregnancy
2 days ago   328   186,472