Jimin is a singer and dancer by profession and ranks among the best in the industry in both aspects. Consequently, he is known for his top-notch vocals and moves. However, a look back at his school days shows that he is actually well versed in various fields, possessing multiple talents and skills. Recently, fans found that there was one more club that Jimin was a part of in his high-school years, one they did not know of. In particular, it emerged that Jimin was, in fact, a member of the book club while he was a student at Korea Arts High School. In a book club, members select a book to read together and discuss various aspects of the literature.

This new revelation left fans in awe of him, knowing that he had already been a member of so many other clubs and had participated in several different school activities. For instance, fans already knew that he was in the robotics club, the billiards club, and the soccer club.

Billiards are a variety of games that are played on a table with balls and a cue stick.

For his fans, much as it was a surprise to learn of yet another intriguing fact about Jimin, it did not really come as a surprise. They had already observed Jimin's habit of reading actual physical books on several occasions, which is not something most people do nowadays, on account of the growth of the internet. The pieces just simply fell into place with this new information, and it made sense that he loves to read hard copy books.

Apart from these club activities, Jimin had a liking for physical education. As such, he also trained in other physical activities. For instance, he trained in Kendo for eight years in Hapkido, and he has a black belt in Taekwondo.

Kendo denotes a modern Japanese martial art. It descended from swordsmanship, and it uses bamboo swords along with protective armor. This activity incorporates values and practices of martial arts with strenuous, sport-like physical activity.

Hapkido refers to a globally practiced and popular martial art with Korean roots, focusing on deflecting opponents' attacks. Its main techniques include punching, grappling, throwing, kicking, and joint-locking, meant to give learners tactics of defense under the principles of water, circle, and harmony. This art is instrumental in avoiding unnecessary injuries as its focus is on subduing attackers and rendering them incapable of attacking. Consequently, it is a potent martial art form.

Taekwondo is considered to be among the most scientific and systematic Korean traditional martial arts. Lessons from Taekwondo are more than just physical fighting skills. Instead, the art shows its learners approaches to enhancing their spirit and life by means of training their bodies and minds.

While in freshman year, Jimin was selected as a scholarship student. He subsequently took part in a short training program that saw him practice Chinese martial arts as well. Notably, only seniors were allowed to partake in this program, but his exemplary performance accorded him the opportunity to be an exception to the rules.

Therefore, Jimin has training in Korean, Chinese, and Japanese martial arts and is outstanding in all of them. Mastering just one form of martial art is usually quite tasking and very demanding, but Jimin managed to master all three, which is nothing short of commendable.

He did not fail to amaze intellectually either. Jimin was known to be a genius in both mathematics and chemistry. He enjoys such highly technical subjects so much that he even makes puns with chemistry and was called the 'god of math.' He can explain science events and also solve complex puzzles and mathematical problems in record time. This is a skill that requires very fast-functioning brainpower, able to decode n information and interpret it within short periods. Few people have such capacity.

In dance, Jimin trained in different dance genres, including hip-hop, modern, traditional, ballet, and contemporary. All styles are diverse with different techniques, which has given Jimin a unique advantage.

Modern dance and ballet are specifically known to be physically demanding and highly technical, whereas hip-hop is known for its powerful moves. Jimin can combine different aspects from each dance when executing any dance move in a choreography, giving it his own special touch. Dance analysts contend that Jimin's dance cannot be taught, neither can it be learned by practicing. It is unique only to him due to his diverse training background and his talent.

Jimin used to go to Karaoke with his family from 5th grade in vocals, and he would sing high notes very well, according to his father's narration. Seeing this, when Jimin wrote what he wanted to pursue later on, his father supported him because he saw that he indeed had the skill and talent to achieve what he wanted.

What is more, Jimin learned to speak in honorifics at a very young age as well, showing that he was well aware of his environment and very keen on the happenings. Not many young children would understand the difference in forms of speech like Jimin did. His mind was very alert, and he learned fast.

It would not be a surprise if some new piece of information was discovered about one more skill or activity that Jimin engaged in his school years. The present Jimin is highly respectable and able to learn anything, which speaks to a strong learning foundation and conditioned mind. He has been able to acquire so many skills in his early years, which has made him such an extraordinary individual, not just as an artist but also as a person.

His versatility and multiple skills and talents will always put him in his own league and is the reason why he is widely respected. He is an ACE in life, and fans couldn't be more proud of him. 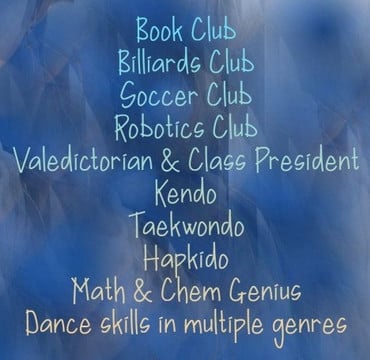 He's indeed very active in his school years 👑
(as if we don't know already, but still very impressive💛)

Park Jimin is extraordinarily talented, he was born for stardom! Global IT BOY

Jimin becomes the most mentioned member following Day 1 of BTS' #PTD_ON_STAGE_LA concert for his powerful moves, mesmerizing vocals, and stunning visuals
5 hours ago   20   6,243

AOA's Seolhyun stuns web communities with gorgeous photos of her in a red dress
1 hour ago   8   2,663