MAMAMOO continues to prepare to release their upcoming album 'Travel' as they release individual teaser concept photos of each member.

On October 28 at midnight KST, the girl group unveiled teaser photos for Solar and Hwa Sa. The two girls show a vastly different concept as Solar depicts a goddess while Hwa Sa depicts a female warrior. The two girls boast of an alluring charm in each of their photos even though they show off contrasting vibes.

MAMAMOO's album 'Travel' will include their title track "Aya" and will be released on November 3 KST. So stay tuned for more teasers until then. 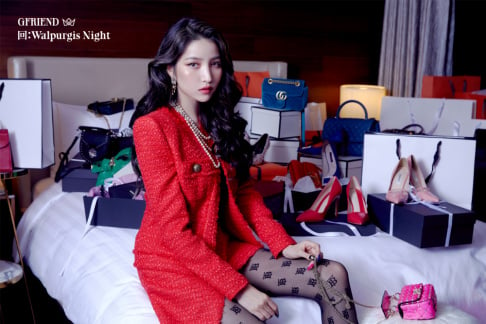 TREASURE is ready to unveil their third single 'The First Step: Chapter Three' with title track poster for "Mmm"

Weird. In the video teaser of that scene (17 seconds in) Solar has a full on monobrow and people from the indian region have been celebrating it. But in the promo photos above she doesn't have it.

NMIXX's Sullyoon stuns the web for her flawless snapshots taken by a photojournalist
4 hours ago   11   3,665

LOONA’s Yeojin raises concern after claiming she hasn’t been paid since her debut
5 hours ago   34   11,932

#BlinksCyberBullying trends on Twitter as K-pop fans call out the toxic fans for constant cyber bullying and doxxing
18 hours ago   166   31,652

"We love you Taehyung" trends on Twitter as fans flood social media with their displeasure over unfair treatment
5 hours ago   18   15,432

Jungkook's enormous popularity in South Korea reaffirmed as he's once again mentioned in a popular Korean Drama
1 hour ago   0   1,528

#BlinksCyberBullying trends on Twitter as K-pop fans call out the toxic fans for constant cyber bullying and doxxing
18 hours ago   166   31,652

Social media post of parents burning all of their daughters K-pop merchandise goes viral
2 days ago   142   230,721