Recently, netizens have been sharing their mixed opinions about the stage costumes that BLACKPINK wore when they were promoting "How You Like That".

One netizen posted on an online community a compilation of the different costumes that BLACKPINK members wore on stage as other netizens gave their two cents on their styling.

The netizen who made the post revealed that BLACKPINK's costumes were actually reformed clothing made from other pieces of clothing. It seems that the stylist used other designer clothes to create a brand new style for the girls to highlight the uniqueness in each piece.

The stylist took these pants to cut them and reform them into Rose's top. If you take a careful look, the pants' waistband is seen on the bottom of Rose's top.

Rose's next costume took the shirt from a fashion dress and reformed as just the top piece for the artist. The original piece of clothing showed a long one-piece dress with puffy sleeves, however, it was reformed as a cute outfit for Rose.

It seems that the stylist likes to dress rose in pants as her shirt, as her third costume is also pants that have been reformed to be the artist's shirt. The waistband is seen on the top of Rose's tube top.

Jennie's shirt is reformed from the denim jacket that gave off a more vintage look. It was made as an off-shoulder top piece for the artist.

Jennie's second costume was also reformed from a high-fashion two-piece dress. The blacktop was cut into a tube top style with a half cape hanging down her left shoulder.

Lisa's jacket was cropped from a box jacket that gave off an older style look. However, it was recreated to look more modern and fashionable for the member.

Last but not least is Jisoo's shirt; There weren't extreme changes to Jisoo's shirt, however, the belt color was changed to accentuate Jisoo's think waistline along with black hair ribbons to match her belt. She also got rid of the matching purple pants and used black shorts instead.

The original poster complimented the stylist team as they were the same team who reformed the traditional clothes in the "How You Like That" music video.

However, there were other netizens who had a different opinion about the reformed styling that BLACKPINK's stylist team created. There were many mixed opinions as some netizens complimented the design's creativity and uniqueness while some criticized that it was imbalanced.

"I don't understand what's pretty. I guess they were being creative and was something different to look at on stage."

"I understand the items of clothing were reformed but they're not pretty."

"Am I the only one that thinks they're pretty? I'm surprised that people think they're not pretty."

"Many fans made fun of Rose's clothing and said it looked like their cheer light stick."

"So many people are reacting negatively to the stylist. I liked the costumes though."

Let us what you think about this in the comment section below! 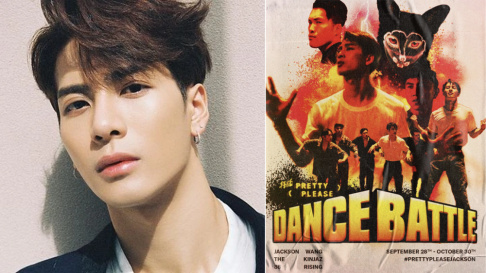 I honestly think the stylist did some of the clothes justice by cutting them up. Lisa’s jacket looks 1000000X better after the stylist worked their magic!!

Blackpinks stylists done a great creative job on these outfits! They turned these clothes that were really bland before into something truly unique! I really love every article of clothing that Blackpink sported for this promotion! Props to the stylists! Awesome work!

TWICE Nayeon's infamous stalker debates and defends himself in an extensive interview on YouTube
7 hours ago   43   17,496

Man arrested in Saudi Arabia for harassing ATEEZ with racial remarks at airport
12 hours ago   55   36,546

Man arrested in Saudi Arabia for harassing ATEEZ with racial remarks at airport
12 hours ago   55   36,546