'Produce 101's Kang Daniel is under criticism for cheating.

During season 1, girls got to mostly choose which concept they wanted to go with. However, in season 2, viewers are being asked to create their own teams for the concept round. The boys themselves cannot influence the voting (except by casting their own one vote).

However, Kang Daniel is now being accused of unfair play. It started with this post, where a fan wrote in the DC Inside Daniel gallery and wrote, "Daniel Kang, look at this. Increase the number of cats for the song number you want." As visible in the screenshot, Daniel has one cat emoticon on his Instagram profile.

He then changed the number of his cats to 4 (The #4 song is Deep House song "Never"). While it can't be proven that Daniel actually saw the post and changed the cats to match, many believe that it's too much of a coincidence.

After the controversy struck, Daniel changed his emoticon once again. He then changed his profile message to read, "I will think more on my actions from now on. I am sorry." 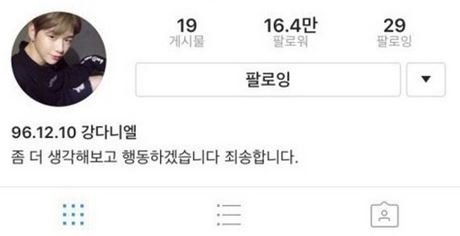 He had changed his account to private, but currently has opend it back up and has erased his apology from his profile.

The 'Produce 101' trainees are not allowed to use their SNS while competing on the show, and many are demanding some sort of action from Mnet on what happened. Viewers point out that there are other trainees on Instagram that have been following the rules, and also that other trainees must also have songs they prefer but are staying quiet, which means this is an unfair advantage for Daniel.

What do you think about the controversy?

Director of 'Beauty Inside' criticizes Jun Ji Hyun and Joo Ji Hoon's drama 'Jirisan' for making the cast look like 'they can't act well'
1 hour ago   8   5,567

BTS's Jungkook trends at #1 Worldwide, being a highlight in 'Permission To Dance Online Concert' with his mesmerizing performance, visuals, and hair
4 hours ago   52   6,593

JYP Entertainment drops a mysterious teaser titled 'Coming Up Next'
4 hours ago   6   3,242

Director of 'Beauty Inside' criticizes Jun Ji Hyun and Joo Ji Hoon's drama 'Jirisan' for making the cast look like 'they can't act well'
1 hour ago   8   5,567

Fans ask an apology from aespa's Giselle over a video that allegedly showed her lip-syncing a racial slur
1 day ago   466   98,653