Pledis Entertainment has decided to separate the Seventeen YouTube channel once again.

The label said, "Hello, this is Pledis Entertainment. First of all, we would like to thank all the fans who show unchanging love and interest to Seventeen. For the past three weeks, all the employees in Pledis Entertainment under CEO Han Sung Soo talked about running and managing the Seventeen YouTube channel, which has been the interest of many fans. We have decided that all of the YouTube contents related to Seventeen will be uploaded on their own channel. This has started already with the 'You Made My Dawn' album trailer that was released at midnight on the 7th. YouTube management, as well as other management policies, is determined by the label. However, we believe that those policies are part of the process of Seventeen seeing their results after their efforts, and the fans becoming happier. From now on, we will continue to do our best to understand the fans and the artist, and bring a better result. We thank Seventeen and the fans, and ask you to show big support for Seventeen. Thank you."

Are you happy with how the situation turned out?

FYI this is just my opinion, I didn’t think merging to one channel was a bad thing. As LOVE and a Carat I thought the merge would be a good move because 1. They are all in fact artists from Pledis 2. It makes finding other artists easier (I could be searching up a song Nu’est and then see a Seventesn MV and click on it) 3. Other big companies do the same thing (example being: SMtown and Starshiptv). No one said anything or protested when Nu’est W MV was uploaded to Pledis Channel, we watched the MV as if it was from Nu’ests Channel. It was only the Carats who flipped out and acted like Pledis only cared about themselves and not Seventeen (which is not true, they do care about thier artists) and protested by boycotting and flagging the Seventeen MV. Which by the way, was still accesable through Seventeen’s channel page, so It wasn’t like you couldn’t see it when you search Seventeen. Pledis does care about thier artists, they frequently listen to what fans want, thier artists are genuinely happy and the Pledis family as a whole are very close to one another. Pledis not very good at managing thier artists which has always been thier downfall but they have gotten better (still a work I progress). They made the move to merge channels in an attempt to help ALL thier artists not to hurt Seventeen. But apparently some Carats didn’t see it that way. Whelp Guess that’s down the drain. Congrats Carats, you won :)

Congrats Carats. Pledis listened to your boycott mess. Because of this mess the other artists under Pledis Entertainment and their fans have to suffer. Thank you for all the dislikes you left on AS/OC's MVs, NU'EST W's Help Me mv, Han Dongeun's MVs and Pristin's MVs. Dont let me start on boycott comments you left on other artists mvs.

Now, Pledis re-uploaded NU'EST W's MV on their channel. All thanks to carats /s.

When will you do your job properly? Where is Pristin? Where is your best selling digital group After School and Han Dong Geun? When will you stop ruining NU'EST? Me asking these questions to braindead company everyday.

Afterschool sweetie why did you put Pledis Entertainment on the map? AS members why didn't you audition in other companies?

Both BTS and Cosmic Girls fandoms upset about the possible plagiarism in Cosmic Girls' new photo book 'ON&OFF'
19 hours ago   88   44,614

Sunmi plays PC games with her brothers, and pro gamer. After dance competition even production crew laughs loudly!
48 minutes ago   0   268 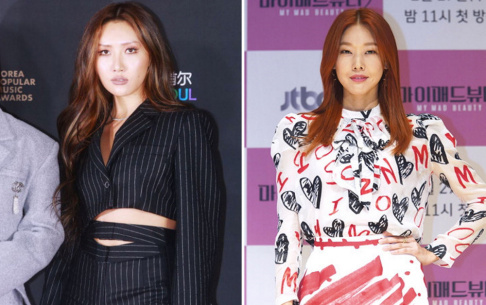