6 Male idols who have established themselves as Composers 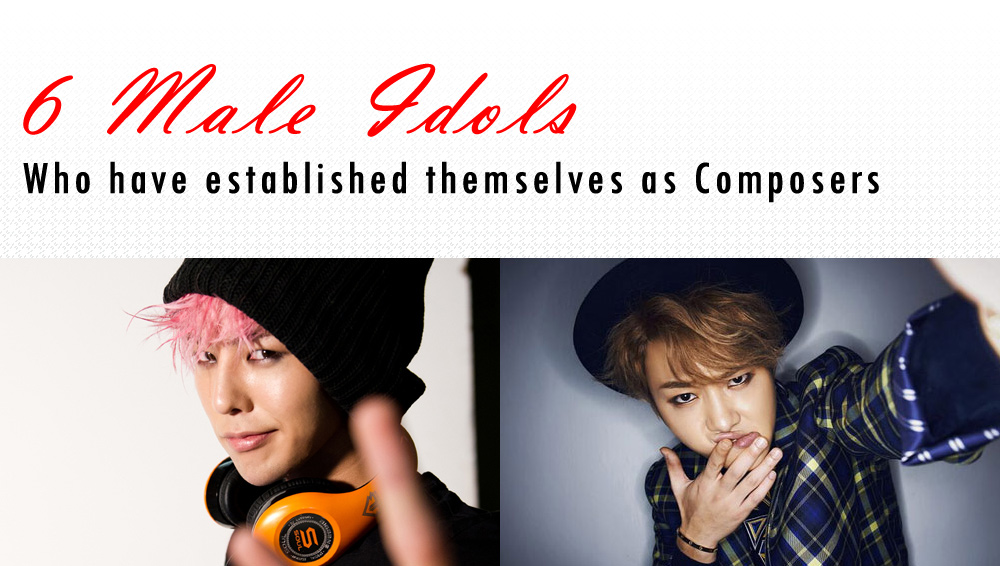 It's hard to deny the fact that many idols, although there can be a somewhat negative stigma to that word, can be super talented -- even multi-talented.  They dance, sing, and act.  Some even compose, proving that they are not only passionate about the music but also talented to the point of being prodigies.

More and more idols these days are breaking the boundary, the glass wall if you will, between where the recording takes place and where the magic in piecing together an entire song actually happens.  Still, only a few have really established themselves so far, so check out which male idols are truly considered composing-dols.

Known as the powerful vocalist of boy group, SHINee, who can belt out high notes with ease, Jonghyun proved to truly have a passion for all things music as he started to write lyrics, then moved onto even composing and producing a few songs!  He wrote lyrics starting early on in his career through SHINee's discography, such as "Juliette" and "Obsession."  Soon, he penned "Gloomy Clock" for IU's 'Modern Times' and wrote, composed, and engaged himself as the producer of Son Dambi's mini-album, 'Red Candle'!  Due to these accomplishments, he's been garnering attention as a 'rising idol composer.'

B2ST's Junhyung definitely needs to be included in this list!  Known to be a very accomplished composer (known as "Joker"), he works alongside good friend, Kim Tae Joo, and is constantly releasing new hits, some even for his group, B2ST.  He produced his entire solo album and is well acknowledged to the point he gets song requests from countries all over the world, such as Russia, Singapore, and Hong Kong!  Some hit songs include, "Shadow," "Caffeine," "Good Luck," and "Cold."

Big Bang's G-Dragon is another idol most people think of immediately in this category; he may possibly be the most well-known idol who composes.  Starting at a young age, he took part in producing, composing, and writing for most of Big Bang's albums, including songs "This Love," "Lies," and "Fantastic Baby."  He also writes most of his own solo songs as well as other YG label mates' tracks, including those of Se7en, Daesung, and Taeyang.  In most cases, he composes songs with Teddy, YG's resident composer.  Because he is so active in all things music, it comes as no surprise that he ranks fifth as the composer who earns the most money through copyrights / royalties in South Korea (approaching around 7 figures in US dollars).

Zico was known to be an underground rapper with his own awesome mix tapes even before debuting as the leader of Block B.  When composing, he often works alongside KIGGEN, Score, Delly Boi, and Pop Time, and he took part in composing and writing some of Block B's title tracks like "Nanrina," "NILLILI MAMBO," and "Very Good," even producing some of the albums, such as the latest one, 'H.E.R'!  However, that is not all, as he also worked for other artists, such as Cho PD, Verbal Jint, and Geeks.

Another leader of an idol group, Jinyoung, likewise proved himself to have the skills! He usually works solo on compositions, but has written lyrics with fellow member, Baro, for their group's songs.  Some songs he made are B1A4's "Baby Good Night," "Whats Going On?", and "Lonely."  It's surprising that there are so many songs he composed because it has only been a few years since his debut.  Even more surprisingly, he never studied music chords on a professional level, which is why his fans coo so much about how talented their precious leader is!

All of CNBLUE are talented when it comes to composing and writing, but Yonghwa may be the most well known of the bunch.  He singlehandedly composed the band's sweet love song, "Love Light," as well as their "La La La."  He also helped compose a lot (and I mean a lot) of the band's other songs, such as their hit track, "Can't Stop." He still has yet to expand his composing career outside of CNBLUE or even FNC Entertainment, but there are definitely some notable songs, such as AOA's "Love Is Only You" and his duet with Juniel, "Stupid" that exemplify his knack for the art.  So far, his work is characterized by very soothing guitar and instrumentals for sweet and romantic songs.

Of course, there are many, many more talented idols who are making a name for themselves as composers these days.  Which ones are your favorites?

BTSâ€™ Jungkook's Spotify playlist records the most unique listeners and followers among BTS and Euphoria is the 16th most streamed BTS song on Spotify
4 hours ago   4   3,690

Many of EXO's biggest fanbases release statements supporting Chen + fans say media like MBC report only on a very small minority that doesn't represent the fandom
1 hour ago   6   1,412

BTSâ€™ Jungkook's Spotify playlist records the most unique listeners and followers among BTS and Euphoria is the 16th most streamed BTS song on Spotify
4 hours ago   4   3,690

Fans think YG has trademarked 'Baby Monsters' as the name of their newest girl group survival series
16 hours ago   37   37,141