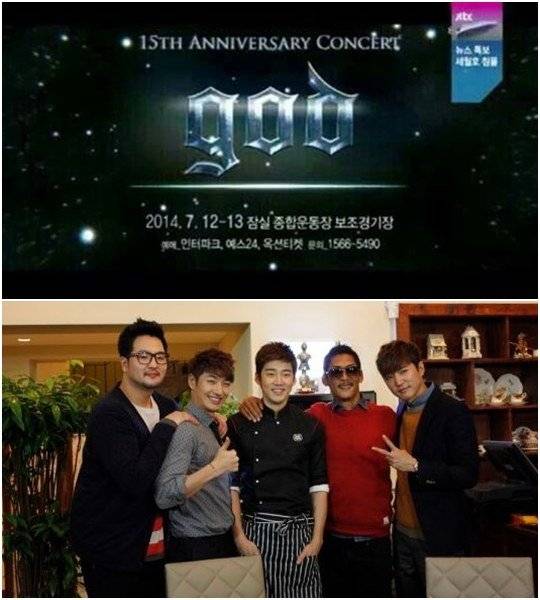 The rumors turned out to be true as it has been announced that g.o.d will reunite for their 15th anniversary project which consists of a pre-release song on May 8 ahead of their upcoming full-length album and concert this July!

g.o.d surprised fans with the announcement of their 15th anniversary concert through a TV advertisement which aired on Korean cable channel JTBC on May 3 followed by confirmation from SidusHQ!

SidusHQ, who is in charge of g.o.d's comeback this time around, announced through an official statement on the 3rd, "All the members of g.o.d came to a mutual understanding in honor of the 15th anniversary since their debut. They will return with their new digital music release on the 8th and hold a concert at Jamsil Sports Complex, Seoul on July 12-13.

g.o.d, who have been actively pursuing their individual activities as artists and actors, completed their long discussion with the fans' anticipation and members' loyalty in honor of their meaningful 15th anniversary... Through g.o.d's 15th anniversary project which was made possible by their memories, friendship, and loyalty, you will be able to meet the five members of g.o.d.

g.o.d's 15th anniversary project will begin with the release of their new song on the 8th... This song will be released as a charity song", revealing that the profit from the sales will be donated to the Sewol relief effort.

They plan to release their full-length album, including the [pre-release] song on the 8th, mid-July. Of course, it will contain g.o.d's warm and trendy color and as much as fans have been waiting for a long time, they will be greeted with an album filled with the members' sincerity and effort.

g.o.d's reunion at their 15th anniversary concert on July 12-13 will be a touching moment... They will perform the songs that have been receiving love up until now and new songs on stage. As much as it is an event with their fans in a long time, we are preparing for it to be an unforgettable and touching experience.

g.o.d's 15th anniversary project will be mainly in the form of their album release and concert."

Get your sky blue balloons ready for g.o.d's 15th anniversary concert to be held at Jamsil Sports Complex on July 12-13. Tickets will be available on Interpark, YES24, and Auction Ticket. Stay tuned for their long-awaited comeback which kicks off with their pre-release on the 8th!

'Penthouse 3' gets criticized by international audiences for their racist portrayal of a new character
5 hours ago   71   22,217

'Penthouse 3' gets criticized by international audiences for their racist portrayal of a new character
5 hours ago   71   22,217