Tablo and Haru will say farewell as Uhm Tae Woong says hello for KBS 2TV's 'Superman is Back'!

According to multiple broadcast insiders on the 2nd, Tablo and Haru have decided to leave 'Superman is Back' with their final broadcast on the 28th. Their replacement will be actor Uhm Tae Woong and his 2-year-old daughter Uhm Ji On. The actor's agency Sim Entertainment rep confirmed the news, stating, "[Uhm Tae Woong] recently decided to join the show and will enter his first filming this week."

Kim Bong Kyu PD of the show also revealed, "Tablo and Haru will be leaving... Due to Tablo's busy schedules and performance activities, it has become increasingly difficult for him to make time for filming. After talking, we have decided that they will remain on the show up until the end of this year... I'm personally saddened about Tablo and Haru's leave, but we think that they'll appear on the show again as special guests later on."

Tablo and Haru have been on 'Superman is Back' ever since the show scored a regular time slot in October 2013, and it looks like the previous rumors of them leaving at the end of the year turned out to be true after all as they'll end their year-long run on the show this month.

Get ready to welcome Uhm Tae Woong and his daughter soon! 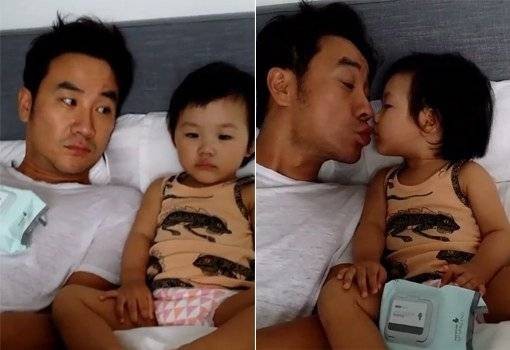 Goo Hye Sun says that people should 'forgive' Ahn Jae Hyun's wrongdoings + sues a YouTube reporter for accusing her of lying
1 day ago   89   26,598

"So wasteful just to get voting tickets..." Korean netizens can't believe the amount of milk that was thrown away by Chinese idol fans
1 day ago   86   36,972